The ABC's of Affordable EdTech in India

India’s K-12 education system supports over 250M students and is desperately in need of change.  While an increasing number of private institutions and startups are stepping in to fill the void, relatively few are focused on the area with greatest potential impact, low-cost private education solutions for the masses.  Two education sub-sectors with significant potential to make a difference are Affordable Private Schools (APS) and education technology (EdTech). Great insight into these two areas can be seen in a report released last year by IDEX fellows titled Education Technology in India: Designing Ed-Tech for Affordable Private Schools.

After diving into the current state of APS providing low-cost private education to communities in India and the current state of EdTech deployment within APS, the report provides insight via profiles of the key stakeholders involved. Through profiling students, parents, teachers and school leaders, the report provides insight into how EdTech solutions can be deployed for better integration and results.  These observations and learning’s are particularly helpful because integral customer habits and cultural nuances are identified and supported by primary research.  Aspects of this research include the 250 surveyed APS of Hyderabad and the on-the-ground analysis of an innovative tablet-based EdTech program deployed by Gray Matters Capital in Hyderabad.  While you’ll have to read the 60+ page report for all the details, the following breakouts represent a few of the significant learnings edupreneurs should be aware of.

The overview, scope and averages

Utilizing a five stage approach illustrated in the image below, the report explores the APS space in India’s which serve “almost 50% of urban students and 21% in rural areas while charging monthly fees between $5.50 and $14 per student.” Meanwhile, high-level statistics are complemented by more granular statistics garnered by a 250 APS sample in the Hyderabad area. 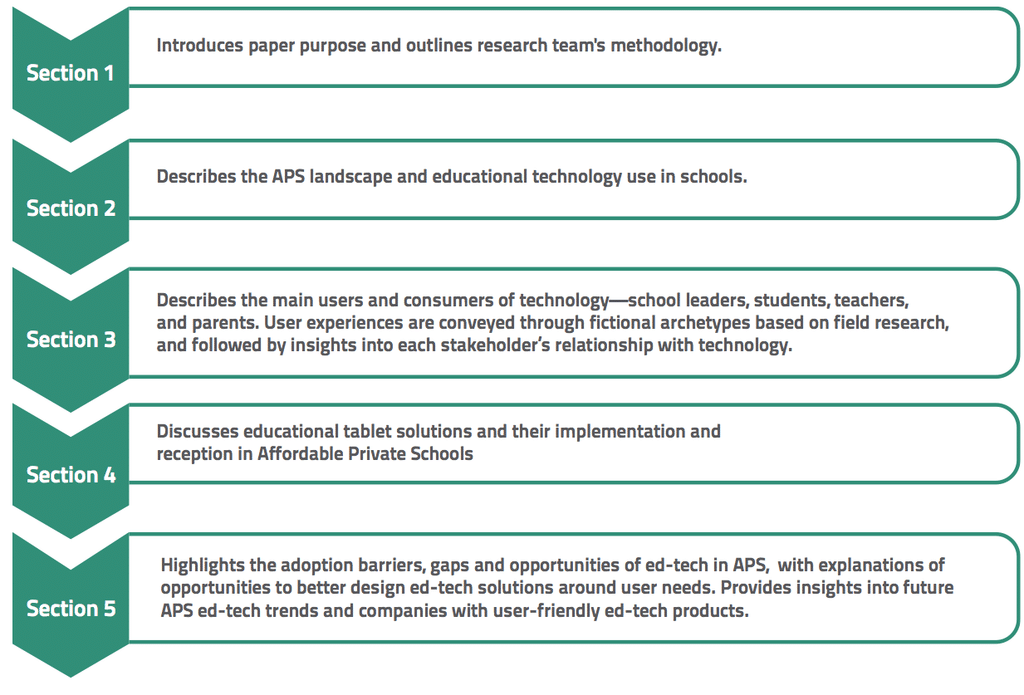 An overview of the common technology implementation models and payment models covered within the report is seen in the image below. 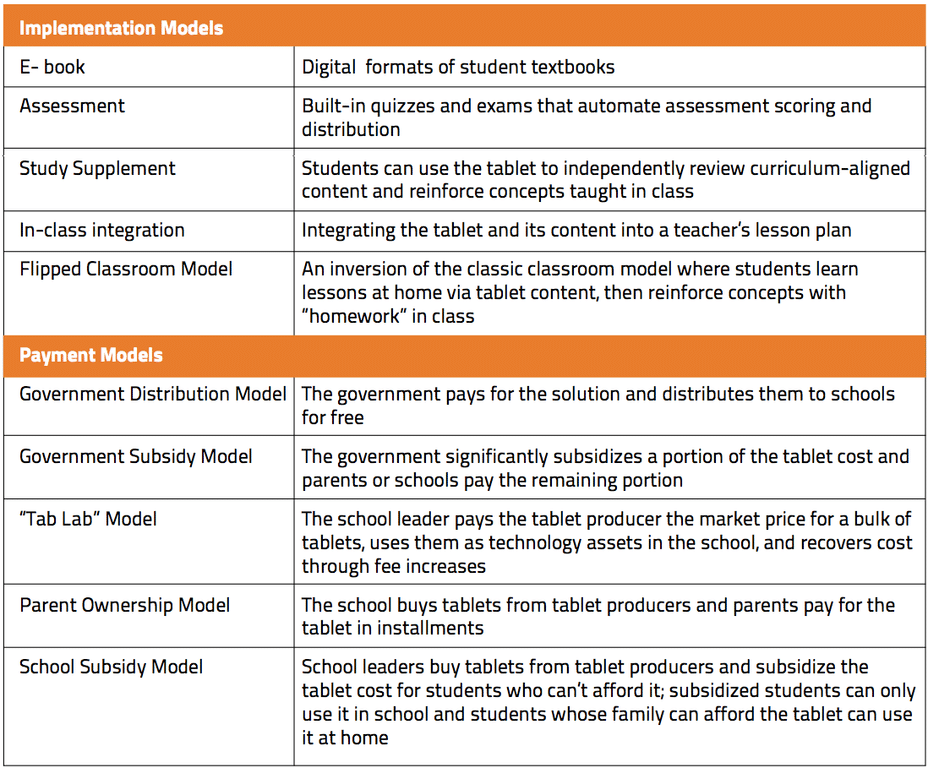 In addition to this data, one of the interesting insights into the operational aspect of APS is demonstrated in the area of cash flow. “One universal problem for APS is timely and consistent collection of fee payments. APS school leaders, usually rooted in the school’s community, understand the APS parents’ fluctuating incomes. They are expected to be lenient with school fees payments and usually don’t reprimand parents too harshly for not paying the same amount monthly. This can cause a number of monthly cash flow and financial sustainability challenges for the school. In a study of APS in Hyderabad, 18% of APS enrollments were offered at free or discounted rates.” 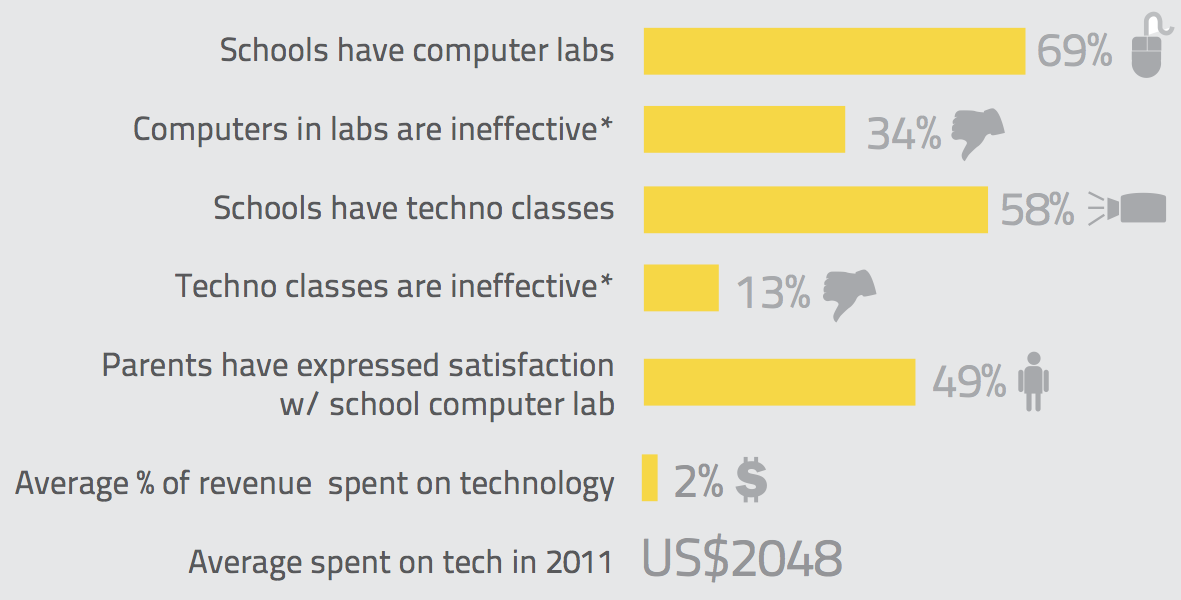 In contrast to the macro level overview, their examination of technology implementation within classrooms yielded additional insight into the realities surrounding both usage and cost:  “There is a widespread embrace of technology by APS. 69% of APS from the sample have computer labs and 58% have techno-classes. Another theme is the strong link between a school’s fee brackets and the presence of technology. 87% of APS that charge more than US$11 per month have techno-classes. However, only 37% of those who charge below US $5.50 per month have techno-classes. Schools that charge more than US $11 per month are 19% more likely to have a computer lab that charge less than US $5.50. Until product prices decrease, schools with fees of about US $8 or less are considered a weak market for smart class solutions. These schools often have smaller revenue streams and will likely have trouble keeping up with payments for smart class solutions.”

Key Stakeholder Profiles – Who is the customer and what do they value?

Perspective into the importance of technology for both students and APS is seen when the report explores that “technology provides leaders a way to both prepare students for a 21st century global economy while providing APS the opportunity to create a competitive advantage to create to distinguish their school from local competition.”  Later insight goes on to support this perspective with additional details which show: “53% of APS parents consider whether a school has computer subjects as a top parameter for assessing whether or not they should send their children to that school. It’s seen as a direct contributor to the school’s brand and reputation and more importantly, as a skill that will make their children more employable.” Against the backdrop of this understanding, the key stakeholder profiles completed for students, parents, teachers and school leaders are particularly helpful.  The following are two examples of insights gleamed from the profiles of school leaders and parents.

While exploring school leadership, two archetypes are identified: the Educationalist and the Entrepreneur.  The Educationalist is “driven by the social function of her school in the community…[and] sees ed-tech as a way to support the goal of educating children,” while the Entrepreneur, “believes ed-tech will keep his school competitive and uses technology primarily as a tool to attract and retain customers.”

“Parents are well aware of how difficult it is to rise through socio-economic ranks. This is why they greatly stress the importance of education to their children and are willing to invest whatever resources they have into education. Parents of APS students spend an average of 13% of their total expenditure on education, 4% higher than what the average non-APS family spends. They look to school to provide children with skills that will make them ultimately more employable. This is why elements like technology and English have become so important in schools—parents see technology as a tool that will help students accomplish more than they have. Parents often view English language and technology skills as vital even when they are English and technology-illiterate themselves.”

Technologies used by students and gender driven variance of access

During the surveys with APS, student access to three major forms of technology were explored: computers, cell phones and the internet.  “Cell phones were most commonly used by the largest percentage of both male and female students; however, there is a deviation in access between the two genders with computers and Internet…Overall, girls report less access to than boys, with the largest gender difference existing with Internet access. More boys have Internet access than have computer access; however, it is the opposite for girls. This is largely a result of the physical limitations of girls in low-income communities. When students go home, girls are often not permitted to leave the house whereas boys are allowed to spend time with friends in a variety of public spaces. Girls also carry household responsibilities after school that their brothers may not. Internet cafes, friends’ Internet-enabled phones, or friends’ household computers are sources for Internet access that girls often cannot tap into.”

While a product or program can be flawless in every way, a lack of “understanding how it is going to be used by students and teachers” will lead to minimal impact. 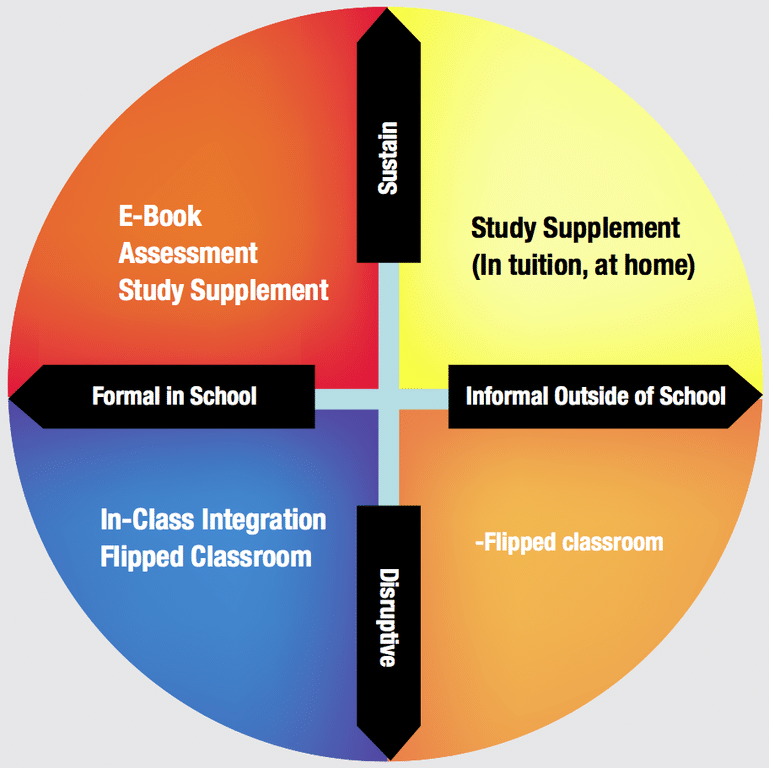 With this in mind, the report applies the Charles Leadbeater’s model of innovation to demonstrate the possibilities surrounding EdTech implementation.  The image to the right illustrates this by showing where innovation is taking place in light of the two planes of  technology (Sustain/Disruptive) and nature of education (Formal in School/ Informal Outside of School).  Before diving into the realities and findings of this approach, the report summarizes, “An intervention can either sustain the existing educational system or disrupt it. The second plane describes how these innovations can either occur in formal institutions such as schools, or take place informally in communities and homes.”

In addition to these areas, the report goes on to analyze and explore additional topics such as:

Additional articles and information from the IDEX fellows can be found at their blog ED-TECH INDIA, while the report explored can be downloaded at Education Technology in India: Designing Ed-Tech for Affordable Private Schools. Unitus Ventures is looking to invest 3 crore in Indian education startups serving the masses during the second half of 2014.  Be sure to learn more about the recent addition of K-12 education pioneer Srikanth Iyer as a venture partner and the specifics around our new education initiative.