31 August, 2015. Bangalore: Speed2Seed, Unitus Ventures’s program supporting incubators and accelerators in India, is now in full swing. Supported by USAID’s PACE Initiative, we’ve partnered with 13 organizations across India––from Bangalore to Mumbai, Calcutta to Goa––to collaborate on and implement more sustainable and effective incubation and acceleration practices, ultimately resulting in more investments flowing into the companies they work with.

As we launched our program, we set out to look under the hood of incubators and accelerators to figure out what makes some of the more successful programs tick, via our “Global Best Practices” study. With the help of Village Capital, Nesta and The Global Accelerator Network, we targeted approximately 200 of the more prominent incubators & accelerators around the world and closed our survey with approximately 80 entities participating in the study.

The results from our analysis were at times surprising, reassuring, and all-around fascinating (at least for a data geek, that is). We’re excited to share some of our key findings from the study in this series of blog posts about Speed2Seed. As we move forward, we’d like to note that we don’t claim to have all of the answers, nor do we believe that we ever will. The fact of the matter is that incubation and acceleration organizations are relatively new players in the global entrepreneurial ecosystem––things are evolving very quickly and have spread rapidly from the hallowed palm tree-lined boulevards of Silicon Valley to all corners of the world. We’re providing a snapshot of what we see happening in the ecosystem today, with leading players. For context, F6S.com has over 5,496 accelerator programs listed globally as of late August 2015.

We invite you to join in on the conversation. This first post of the series will help frame our analysis and methodology, and over the course of the next month or so, we’ll be publishing other posts centered on themes related to an entity’s community and network, sustainability, and inflow and outflow of entrepreneurs. 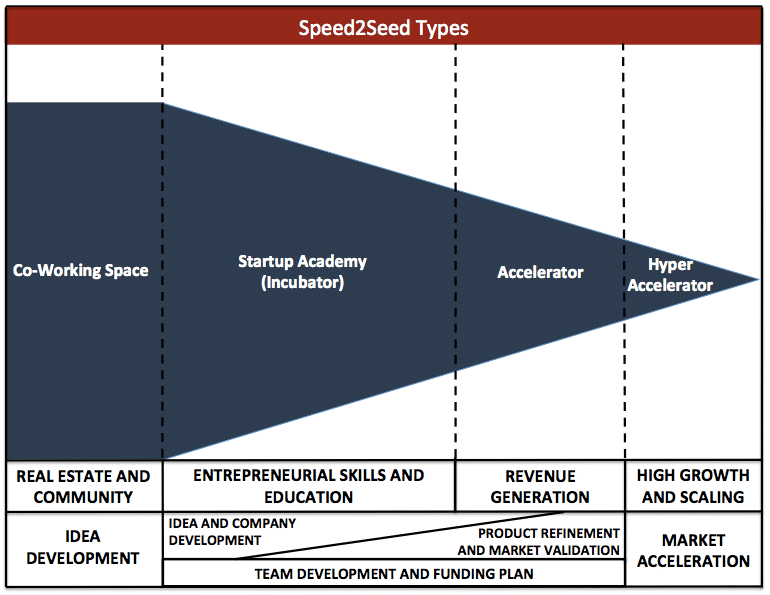 Note from the image above (Figure 1) that the blue area does not reflect a path through these programs (though it could). Rather, it demonstrates not only the selectivity of the entity but also the general share of entrepreneurs in the incubation/acceleration ecosystem that would be viable candidates for the program. Incubators have a large share of potential matches, whereas hyper accelerators do not and must be very selective of the participants they choose.

For our analysis, we looked at the data in two ways: first by quartile of our success index, and then by the Speed2Seed archetypes as seen in Figure 1 and described above. If an incubator/accelerator was vertically integrated, we dropped them from the sample of 78 responses, leaving us with a total sample of 52 entities. Our success index is a combination of an entity’s percentage of total participants that acquired funding within 6 months. Why? Because as investors, we view successful incubators/accelerators as those that are able to produce startups that successfully attain funding before they run out of resources –but we’re biased, we’ll admit. Those who are focused on fostering entrepreneurial skills in the ecosystem might view success as the number of participants that have successfully completed their program, or are still sustainably operating after graduation.

For our archetype analysis, we identified the different entities based on where they place their priorities when accepting participants. We find hyper accelerators placed a higher priority on participants already generating revenue or having a prototype, rather than just the idea. Accelerators do the same, but to a lesser degree. Incubators, on the other hand place higher emphasis on a participant’s idea –naturally, as they focus on idea-stage entities.

Using these different methods of analysis, we were primarily interested in the different practices that entities implemented and how they correlated to participants’ ability to acquire investment after the program.

We dug into our quartile analysis of 6-month funding rates, too. In order to figure this out, we assigned Hyper Accelerators as 1’s, Accelerators as 2’s and Incubators as 3’s. Based on our quartile analysis of our success metric (note: this is still looking at our success metric of grads getting funded within 6 months), we found that the mean scores for each quartile were as follows:

We found that almost all of our hyper accelerators were in that top quartile of success while accelerators composed the majority of entities in the second and third quartile. Incubators were often in the third and fourth quartile of our success metric. Note that this does not mean incubators are bad – it means they might have different success metrics and different goals.

These results make a lot of sense. Quite simply, investors are looking for startups that have the greatest likelihood for success. At Unitus Ventures, scalability is crucial to our investment thesis, so we as investors are going to look at entities that have traction and potential for growth. While there may be promising startups coming out of incubators, often times they’re not mature enough for venture investment just yet. Therefore, those accelerators that take in participants who already have developed a prototype or are generating revenue are going to pique investor interests once they’re done with an acceleration program. Hyper accelerators that go even further into high scalability and market expansion are going to be even more tantalizing to investors. The next step is figuring out what makes these programs tick.

Taking a look under the hood…

Stay tuned as we dig into our data and analysis further! Next up in the series, we’ll be discussing what matters for incubation/acceleration communities and networks.