Networking is rubbish; have friends instead. ­­­­–– Steve Winwood

Throughout the business world, people tout networking ad nauseam, turning it into this contrived, often forced transaction of business cards between people. When it comes to startups, there’s no denying that an entrepreneur’s network is incredibly important. We often hear the phrase, “it’s not what you know; it’s who you know”. We’d like to expand on that––it’s not what you know; it’s who you know and how well you know them. The question is, who are the people that comprise a strong community? Better yet, how do you keep these people engaged with you over time? Answering these questions is incredibly important not only to the success of an accelerator, but to the startups in these programs. Our recent Global Best Practices study of incubation and acceleration provided some illuminating answers. 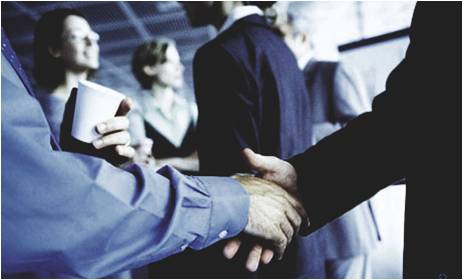 In 2005, Y Combinator revolutionized the concept of business incubation with a shift towards mentor-driven incubation practices. As incubation and acceleration has extended to almost every corner of the world, the concept of a mentor-driven approach is common knowledge. Our initial hypothesis when it comes to mentorship was that if an incubator/accelerator had a massive pool of mentors available to its participants, the entity would be associated with a higher success metric. We found that this simply wasn’t true––what was associated with a higher success metric was whether mentors were heavily engaged with participants or not.

But it’s how well you know them

Here’s a quick case study of Microsoft Ventures in Seattle. One of the obstacles they overcame was the super saturation of mentors. When they started operations, Microsoft Ventures had a massive pool of mentors available to their participants, which sounded great––until it was put into action. They found that with far too many mentors available to participants, the mentors weren’t able to build consistent relationships with participants and many would end up disengaging because they didn’t feel that they were being helpful enough. They shifted their approach to a more targeted mentor-startup matching model and ultimately reduced the number of mentors available to participants. They shifted towards higher engagement versus an extensive network of mentor, which has been beneficial to all parties involved. What matters most is the relationship developed between mentor and participant.

On the other end of the spectrum, mentor engagement at incubators becomes a tricky matter simply due to the maturity of the startups that are in incubator programs. As most incubators work with startups that are very early stage, or even idea stage, it becomes difficult to keep mentors enthusiastic about the growth of the startup. Because this data is correlational, there are several ways to interpret the data presented previously. While we find that incubators have a smaller pool of mentors per participant as compared to high-performing accelerators, perhaps this is due to the fact that it is difficult to develop a mentor pool that is interested in working with idea-stage startups. Further, of those mentors that are present, they are generally less engaged as compared to those of accelerators and hyper accelerators. This issue is a constant stressor for incubators that we work with in Speed2Seed.

Alumni and Investors Matter Even More

One of the most striking results from our best practices study was the significantly different use of alumni and investors in an incubator/accelerator’s internal network. While we hypothesized that the use of alumni would be associated with higher success metrics, we didn’t expect that there would be such a stark contrast between the highest performers and the rest. We developed an alumni index that indicated the number of ways that an entity utilizes its alumni as well as the depth of that engagement. We found that those entities that placed in the highest quartile of success had an alumni index of 13.90 as compared to 5.90 in the lowest quartile. Those in the highest quartile end up engaging their alumni in a greater number of ways and to a deeper extent than those who are associated with lower success metrics. We also find that Hyper Accelerators typically engage their alumni more than the other archetypes. Hyper Accelerator’s alumni index of 15.40 comes in at almost double the accelerators index of 8.55 and almost three times that of incubators with an index of 4.83. 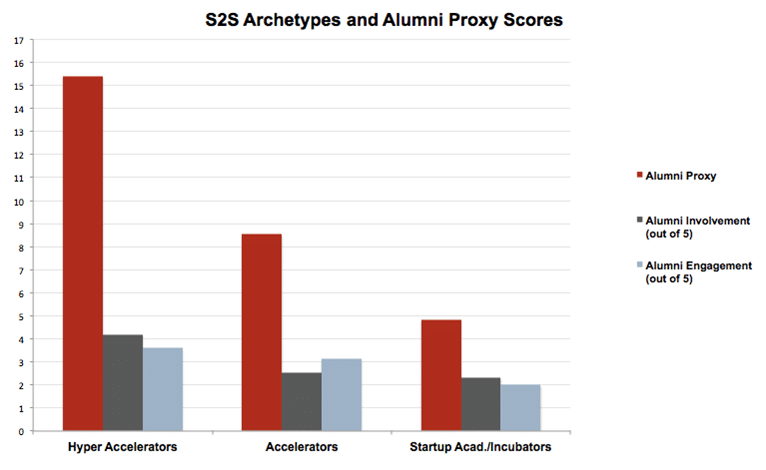 Ultimately, those entities that are performing well engage their alumni with the program after they graduate and keep them coming back whether it be through alumni days, as lecturers, as mentors, as consultants or even as their eyes and ears in the startup ecosystem. These high performing entities are able to create a bond with their alumnus that keeps them coming back and engaging well after their time as participants ends.

We see a similar trend with investors. While there is definitely a relationship between the breadth of entity’s investor network and success metrics, we are especially interested in how some of the top performers expand on this relationship. Along a similar thread of thought as with mentors and alumni, we hypothesized that those entities that expanded on relations with investors and were able to more deeply engage them in the program would be associated with a higher success metric. We found that for our Investor Proxy (depth and breadth of relationship with the program), hyper accelerator both involved and engaged investors more than accelerators and incubators, with Investor Proxy scores of 13.60, 11.31 and 6.42, respectively). 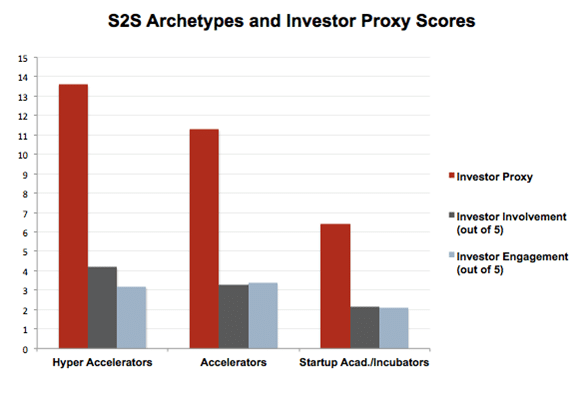 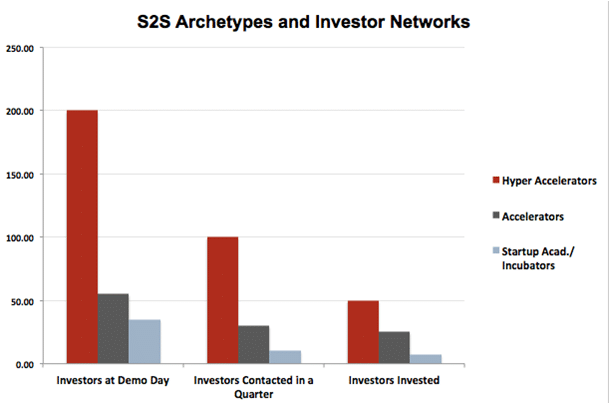 So what gives? Obviously investors are interested in one thing across the board: investible startups. But to dig a little deeper, we find that those entities that are associated with higher success metrics more deeply engage investors in the program itself. These investors serve as mentors to participants, come in as lecturers during the program, and feed into this sense of community at these top programs.

A Culture of Keeping People Around

All three of these community members––mentors, alumni, and investors––matter to a startup because each member of the community brings something important to the table whether it is an extended network, a relatable experience, or sage entrepreneurial guidance. Where things get even trickier is figuring out how to keep all of these different players engaged, excited, and helping the incubator/accelerator succeed as a whole. It boils down to culture. We think that culture is one of the most important facets that distinguishes the top performers from the rest. There’s a certain camaraderie that comes into play at some of these highest performing accelerators––there’s a degree of pride associated with coming from a program like Y Combinator, 500 Startups, TechStars or AngelPad. When you have alumni coming back to support the program, investors digging into the program, and mentors building strong relationships with participants, you know you’re on the right track.

So how does an accelerator build a community around culture? Good question. Dave McClure once suggested lots of beer and chocolate and that’s not too far from the truth. The goal is to keep things exciting, fun and interesting for everyone. People should be eager to dig in, and if beer and chocolate help get the job done, by all means give it a shot.