Remember the time when drivers just drove? DriveU wants to bring it back

Uber and its multiple competitors – Lyft, Ola, Grab – have revolutionised the modern-day commute. But in their quest to dominate the world and delight the customer, they have often shortchanged the supply side: the drivers. ET Prime had earlier published an in-depth analysis of the driver- partner issues in India.

By 2015, as TaxiForSure bowed out, selling o to Ola, Shastry, the rst angel investor in TaxiForSure, had a ringside view of the events unfolding. He put together a small group of people who had left TaxiForSure after the deal with the aim of disrupting the driver-aggregation market. They set an ambitious target of launching their product within 90 days. On the 89th day, DriveU was born.

Shastry is aiming for a smaller market – private car-owners looking for drivers – but wants to be protable. He wants his driver partners to make money, which he believes will ensure better customer experience.

DriveU is app-based and is available on both Android and iOS. The company also allows booking from its website and, lately, through calls to its call centres.

“I found that the driver-aggregation market in 2015 was what the taxi- aggregation market used to be in 2011 – primitive and unorganised. Price was high. Utilisation was low, both for drivers and car owners. Could we optimise it? People told us we were going after the wrong market: ‘No one will buy cars when they can use taxis.’ But we persisted,” Shastry tells ET Prime. 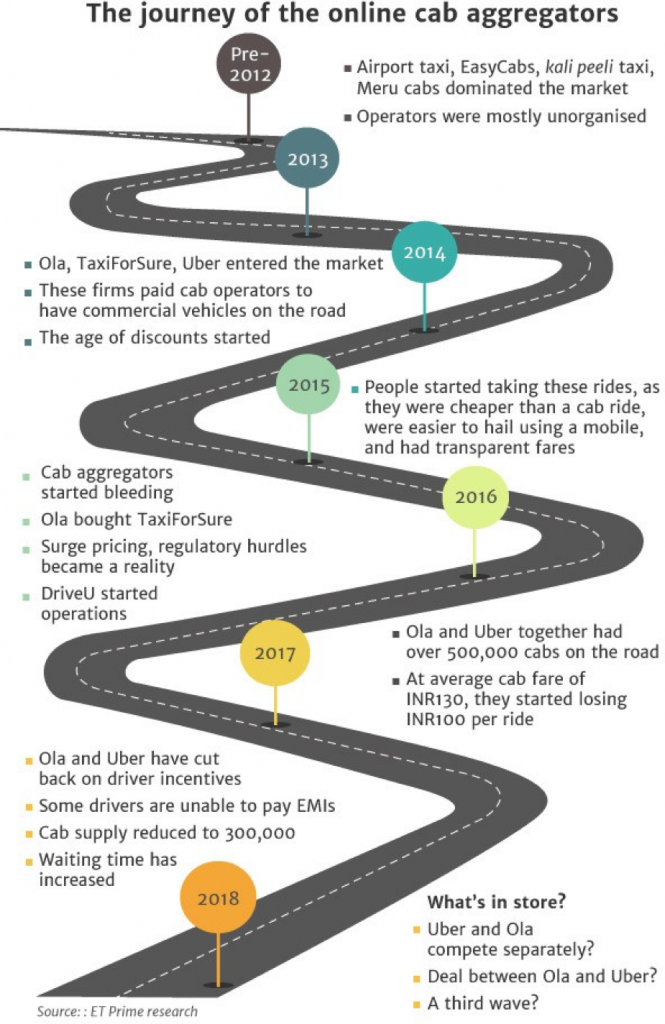 In the last three years, the journey of the customers and the drivers has seen dierent dynamics: from riders being pampered with incentives, to complaints of frequent surge in pricing, to drivers facing decline in incomes.

One thing that the competitive ferocity in the ride-hailing market has done is increase the total volumes. The gross bookings value of online cab aggregators grew 40% between 2016 and 2017, fuelled by massive investments. 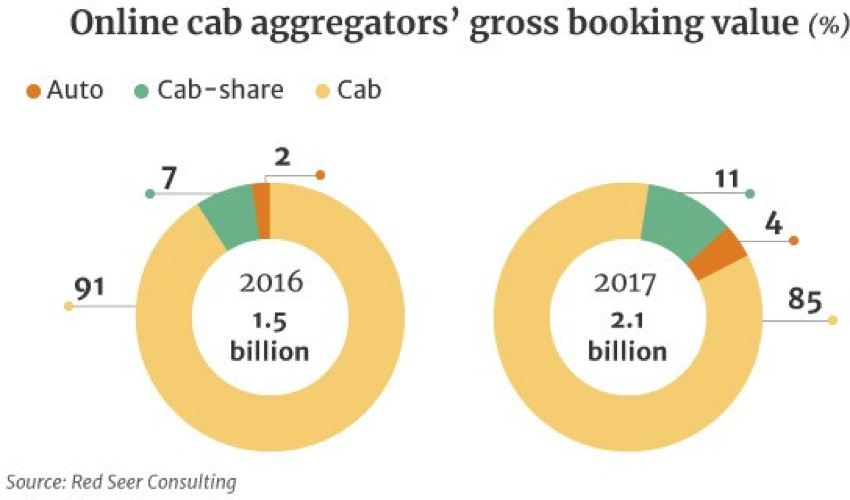 But in order to increase the gross booking value, Ola and Uber had to keep reducing average fares and promise higher driver incentives. One pillar of the business was hiding in plain sight under the layers of investment required for market-making — profit. 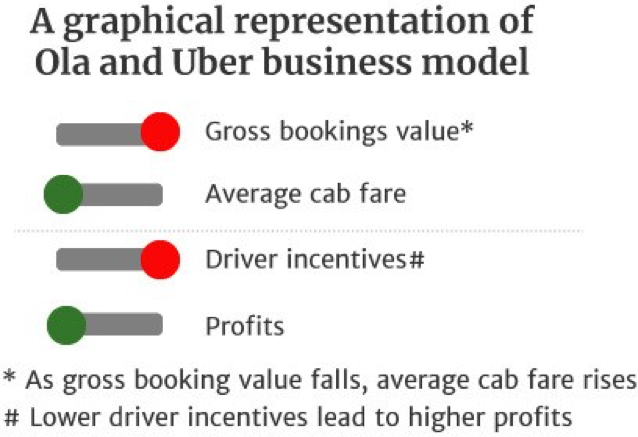 As the cab aggregators started bleeding, incentives were cut, which eventually led to protests by drivers.

DriveU has come up with an alternative – aggregate drivers with private cars. Here, drivers don’t need to own or lease cars. They just drive. In the process, it has secured a space that may not witness blistering growth, but is less bloody compared to the battleeld chosen by Ola and Uber.

With USD4 million in funding so far from Unitus Ventures, Amit Singhal (ex- Google and ex-Uber), Goe Woolley (Patamar Capital), Rajeev Madhavan (Clear Ventures), and other Silicon Valley investors, DriveU has expanded its footprint to six cities and 6,000 drivers. It has been acquiring smaller local competitors – CallAtHome in Gurgaon, DriversKart in Chennai, and Zuver in Mumbai.

The key question is: How will the company scale up?

Srikrishna Ramamoorthy of Unitus Ventures, DriveU’s rst institutional investor, says, “India has one of the highest private-car sales growth in the world. Passenger vehicle sales grew 9% in 2017. Owning a rst car is still an aspiration for many, and demand is going to remain high.”

DriveU is targeting cities with high car ownership. What may work in its favour is the fact that about 60% of India’s population will live in cities by 2050, a dramatic rate of urbanisation. “More people will need jobs, and with more trac, less people will want to drive, though they will own cars. Here, DriveU ts in well. It has a great team with solid execution,” says Ramamoorthy, who volunteered as a part-time driver for DriveU on New Year’s Eve and drove some party-goers home.

If Ola and Uber are attracting users who would have otherwise travelled by public transport, DriveU is clearly targeting those who have their own cars and more money.

People who want to enjoy their drink on their evening out and not drive; elderly people who may be unable to drive; people who need errands to be done; those with erratic work schedules; enterprise clients, and outstation travellers – these constitute most of DriveU’s client list. (Signicantly, almost 60% of DriveU customers are women, who feel condent about using its services because of rigorous background checks on the drivers.)

These people are not driven only by price consciousness, reflecting in DriveU’s higher average booking duration of four hours and fares of INR400, compared to the average Ola/Uber fare of around INR130. This is also 33% higher than neighbourhood driver services.

Shastry says, “From the beginning, we ensured that there would be no surge pricing for the customers. Just serve them the best way we can. And help the drivers make a decent income.”

With no leases or cars to maintain, DriveU drivers don’t have to recover car expenses before they make money. Money gets transferred to their bank accounts weekly instead of monthly. Also, city-specic incentive schemes help them improve income. There are also the usual insurance schemes and professional-training programmes. Interestingly, it is this focus on driver enablement that got Shastry his first investment from Unitus.

ET Prime met three drivers during their shifts at the DriveU oce.

When Mohammed Islam took voluntary retirement after 20 years of service with the Indian Air Force, he took up a job in insurance and then in the real- estate sector. He was earning up to INR10 lakh as an area sales manager before demonetisation hit the cash-based business hard. With a monthly instalment of INR30,000 to pay, he could not aord to be out of work. A chance meeting with a uniformed DriveU driver brought him to the company, where he now freelances as a driver during the high-demand 6pm-midnight shift. He does between three to drive drives per day and continues his real-estate work in the morning.

“I can’t afford to buy or lease a car, which is what Uber and Ola need drivers to do. This way, as long as I have a driving licence, I can drive and earn. And I don’t have to spend in return,” Islam tells ET Prime.

Chetan, another driver, has been driving for the last eight years. With DriveU for a year now, Chetan was initially a full-time driver. He has now joined the driver-experience team, where he gets to speak to drivers and address their problems.

What kind of problems do the drivers face?

“Unlike Ola or Uber, here payment happens quickly. But when they work late nights, with one-way drops, even though DriveU pays them a return fare, [transport is] not always available immediately. As they walk, they could be chased by dogs. Once, a driver got mugged.”

ET Prime also met Prakash, from Bijapur in Karnataka. He is just over a month old to Bengaluru. Driving has been his passion since childhood. Back home, he tried to get a government job. But that didn’t work out too well. He came to Bengaluru with INR8,000 and a driving licence. He chanced upon DriveU through a friend. Within the rst few days, he gured out that if he worked around 18 days a month, he could make around INR30,000. “I took three days o after working for a month. While returning from my hometown last month, I switched on the app and got a DriveU drive.”

A senior executive and former employee of Ola says,

“There are some [peculiarities in] the Indian market. Unlike western countries, where people might drive an Uber or Ola for additional income using their own cars, here many people drive for a living. A commercial licence to drive a cab takes two years to procure.”

“Often people in villages get commercial licences and work in other jobs. There is a hidden pool of commercial-licence holders. Ola was trying to find those guys and teach them to drive. That was its biggest supply pool.”

That seems to have become DriveU’s pool as well now, without the additional hassles of having to provide them vehicles to drive.

There are still issues to sort out – higher waiting time for drivers between rides, the low-demand cycles, and late-night commute safety for the drivers. Ramamoorthy of Unitus experienced some of this when he doubled up as a DriveU driver. “The idle time during a trip, the wait times, and the distance between two rides could get frustrating for a driver,” he says. “Perhaps there’s an opportunity for drivers to perform smartphone-driven micro tasks or mobile learning while waiting between rides. Maybe foldable scooters for drivers to get to their next ride could work.”

Who’s driving into the future?

Where does that leave DriveU? Let us imagine three possible competitive scenarios:

Meanwhile, the market gets another option to choose from. Utilising existing vehicles instead of adding more cars to the already-congested roads on the one hand, and enabling drivers to drive without forcing them to become owner-operators on the other, will continue to be a niche but viable alternative. Even as Ola and Uber promise to be everyone’s private drivers, DriveU and the likes can actually bring the competition home as long as the economics work out – for them, for private-car owners, and for drivers.

This article was originally published on Economic Times Prime >