Demographic Dividend: the acceleration of economic growth resulting from change in the age structure of a population

We explored the importance of economic security, opportunity and dignity underlying our approach to Livelihoods, and demonstrated how we are working to leverage reports showing up to three-quarters of the impact to raise 680M Indians to decent standard of living will come through “unlocking investment, job growth, and productivity” in the first article of this series. Now, our focus shifts towards India’s potential demographic dividend. 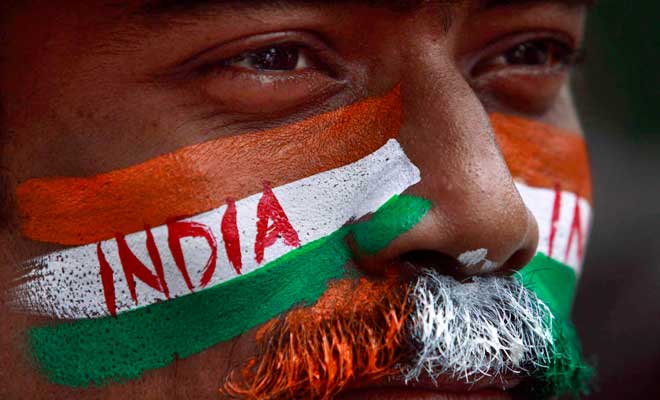 By 2030, India is expected to have 28% of the world’s workforce, a billion person labor force, and the world’s largest population, at approximately 1.4 billion citizens.  Today, two-thirds of India’s population is under the national average of 26 and India’s economy is in the midst of a structural transformation.  As it transitions towards being a modern skills-based economy focused on manufacturing and services, and away from being rural and agrarian, many are being left behind.  By exploring the current realities surrounding the skill levels within India’s workforce, we’ll explore the skills, training and job creation gaps which need to be addressed in order to accommodate the annual 13M Indians who will be entering the workforce for the first time during the next decade and a half.

Over 100M urban migrants have left their homes, families and support networks in search of better opportunities seasonally.  They, like much of India’s next generation, are struggling to connect with meaningful employment opportunities due to a lack of marketable skills.

Unfortunately, this is understandable when you consider the following statistics collected regarding India’s population, where: 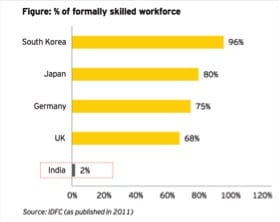 As a result, there is a significant ‘skill-gap’ between the supply of skilled labor and the market demand for applicants with job-ready skills; leaving 68% of India’s businesses struggling to find qualified applicants.  With India’s government working to train and skill 500M by 2022, or 50 crore a year, it’s important to understand both the composition of India’s workforce and where the huge influx of new labor will come from.

Two-thirds of India’s population is under the national average age of 26 (versus 37 in China and 45 in the US and Western Europe).  As a result India’s potential workforce (age 15-59) is on track to increase from approximately 761 million to 869 million from 2011–2020 before swelling to 1 billion by 2022.  By taking into account India had a workforce of just under half a billion in 2005 (26M Formal and 433M Informal) and subsequent growth since then, according to Ernst & Young 35 crore (347M) additional Indians will be eligible to enter the workforce during the next decade.  As part of this, there will be more than a million new entrants per month or 13 million Indians per year, who will enter India’s workforce for the first time.

Realizing a demographic dividend is not a given

Reaping the benefits of a young working population via a demographic dividend is not a forgone conclusion, especially when India’s youth lack the preparation and opportunities necessary for gainful employment.  Three significant challenges facing India’s 13 million annual first time job seekers looking to enter the job market are:

With such a huge influx of potential new talent coming on line each year, there is massive opportunity for scalable businesses that can help bridge the annual gap not just from 4.4M to 13M, but also towards the 50M annual trainees necessary for India to achieve its 10 year 500M trained goal by 2022.  As Dipra Mukhaopadhyay of the National Skill Development Corporation (NSDC) pointed out, India’s vocational training sector needs “capacity expansion for skills training to the tune of eight to ten times” in the next 10 years.  By combining the 500M training goal at the a conservative cost of of Rs 5,000 per student, the NSDC estimates there is a market opportunity of $20 billion on the table during the next ten years.

Need for job creation and the impact on India’s economy

In addition to the training gap, job growth has not kept pace with GDP during the past decade, where the annual average job creation during 2005-2010 was approximately 5.5M.  While this was concerning beforehand, things are getting worse with the slowing of economic growth, which slowed to sub 5% levels during the past two years, in contrast to the 8% growth during the previous two years. One factor contributing to this is the fact that more than 68% of businesses in India are currently having difficulty filling jobs according to this global Talent Shortage Survey by Manpower Group.

Similar to the challenges faced within training, there is a huge opportunity for current employers and future job creators able to step in with scalable solutions to bridge the annual jobs gap from not only 5.5M to 13M per year, but also towards the 35M annual additional jobs necessary for India to create the 347M jobs India’s economy needs by 2022.  While the Indian government has established a Rs 10,000 crore a year national campaign to skill, re-skill and train 500 million people and helped shift focus towards 21 high growth sectors, India businesses need to step in.

India’s Demographic Dividend Is In Doubt Without Small Business

Without a way to meaningfully absorb and gainfully employ India’s massive incoming workforce, India is in danger of squandering the massive opportunity present within their potential demographic dividend.  While the government can help spur development within training or partnerships through initiatives such as the NSDC, India’s ventures and small businesses must ultimately be empowered given the scale and scope of India’s future job needs.

In the next article of this series, we’ll dive into how India’s economy is changing to identify the sectors of growth with both the skill requirements and capacity necessary to absorb and enable the 350M in need of employment during the next decade.