Moving from accidental to intentional gender-diversity to create value

share this article
In this article
Governments and organisations alike are waking up to the disbalance of gender-equality in businesses; in our case, decisions that affect investments, business decisions and profitability.

In pursuit of excellence, there are accidental results and there are intentional achievements. This is especially true for goals that go strongly against the norms, and are hence difficult to reach. Governments and organisations alike are waking up to the disbalance of gender-equality in businesses; in our case, decisions that affect investments, business decisions and profitability. From a moral, social or risk-management perspective, equality has now become a driving goal that promises a brighter future for all of us.

Unitus, for the last 8 years, has been investing for financial returns and scaled impact. During a recent review, we found that 75% of our first Fund and 80% of our second Fund’s portfolio companies inadvertently meet gender-smart investing criteria as defined by the 2x Challenge. The criteria include women ownership or leadership or women on the board or more than 30% women employees or if their business, by nature, disproportionately impacts women. Unitus is, however, the exception rather than the norm.

Out of every 100 CEOs in India, only three are women. Only 9% of startup founders are women. Of the total capital received by venture-backed startups in America, only 2.3 per cent went to companies started by women. Though women in middle management may be common, as they rise through the ranks, the numbers fall; with few senior leaders, board members or CxOs being female.

And yet, it has been conclusively proven again and again, that women create value for firms. A report by the Boston Consulting Group found that revenue from women-founded companies was 10 per cent more, on average over a five-year period, than companies founded by men. BCG also found that, despite raising less money, women deliver higher revenue. According to research, female founders not only deliver good returns on investment, they also out-perform male-only teams. Studies at First Round Capital found that companies with even one female founder performed better than those with all-male founding teams. 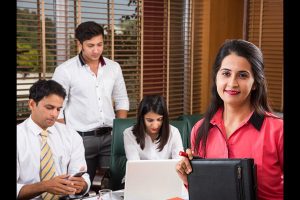 A McKinsey Global Institute report predicts that if women were granted real equality, $12 trillion could be added to global GDP by 2025. Numerous studies prove that there is a direct link between female leadership and improved business performance—like the 2015 MSCI World Index study, where companies with strong female leadership generated a return on equity of 10.1% per annum versus 7.4% for those without. Recent studies have shown that gender-balanced leadership can improve revenues by as much as 20%.

Businesses run or founded by women face the same challenges as those run by men – but amplified, with a steeper incline to resolution. The size of these businesses is also comparatively smaller – this is not by choice. Across the developing world, finance is a major constraint for women entrepreneurs, with limited access and unfavourable terms being cited as impediments. In the venture capital ecosystem, men still dominate at every level, with only about 10% of women investors who have been funded in. In a study conducted from 2011-2013, just 3% of venture capital funding was raised by female CEOs. In developing countries alone, the International Finance Corporation (IFC) estimated a $320 billion gap in financing for women entrepreneurs – global totals across formal and informal sectors around the world would be far higher.

Funds like Unitus are working to build capacity for women investors, helping them hone their fund management skills as well as offering support in terms of capital investment. Yet, the practical challenges are many – for example, a global norm is that when starting a fund, the entrepreneur puts in a General Partnership commit of 1% of the capital – but most women are not financially secure enough to take that kind of risk. Add the unpredictable fundraising period when you are not receiving an income or remuneration, and the risk for most women just doubled.

Add to that the problem of bias: male entrepreneurs are questioned about business growth, but women are asked about business sustainability and whether they can manage family and work. Some risks are also culturally not associated with men, like prioritizing family over work or being of child-bearing age, no matter that men have families too. Women are boxed in and expected to succeed only in fields that are associated with femininity, like food, fashion and cosmetics. In fact, women advisors are helping VCs apply a gender-lens to investing in fields like health and sanitation, child development via gender neutral toys and more. When women’s perspectives are counted, impact and profitability go hand in hand. Women leaders also have a unique perspective into the challenges faced by women employees and push for inclusive maternity and paternity leave, flexible work options and more – ensuring that not only are companies chasing a profitable bottom line, they’re also going to dretain the best talent pool available.

Female VCs, leaders and advisors can make a world of a difference to this scenario simply by adding their perspectives to funds and boards. India is finally seeing more women coming into leadership positions, partly thanks to a robust support system made up of other women; family members, help, etc.

Rising pressure to be gender-smart and diverse as well as increase profitability is pushing investors to be more open-minded towards helping women fund raise, be considered equal, and get funded. Globally, organisations like WeConnect (a global network that connects women-owned businesses to qualified buyers) and SheEOs (finance for female entrepreneurs) helps women pool their capital, networks and ideas – thus widening the pool and pipeline of female entrepreneurs and future investors.

Global firms are waking up to the realisation that value can only be sustained when half the world’s working population’s voice is heard and listened to. Networks and organisations are forming to rally the cause. A few notable ones are Federation of Indian Women Entrepreneurs, Dell Women’s Entrepreneur Network, Her Entrepreneurial Network, Empower.

Already gender diverse, Unitus aims to continue to be more intentional about it in the future, both in investment decisions and portfolio management. We’re currently working with each of our companies to figure out how to increase the percentage of women: in the customer base, supply side, in employment or especially in leadership. By leveraging women-only networks that men rarely have access to, we’re also working to encourage gender- smartness through as many women advisors as possible. On the forefront of this growing global trend, we’re also careful to remember that it is an evolving process, one that considers business growth and early-stage pivots as well as a long-term view.