This article is about the ideal conditions necessary for mCommerce to transform how an entire country does business.  These conditions now exist in India. mCommerce in India is primed to explode thanks to the increasing integration of the internet and mobile technology into everyday life.  In a country where two-thirds of the population is younger than the national average of 26 and the most explosive growth of new internet users being non-urban, India has a young tech savvy generation of users whose first—and exclusive—means of accessing the internet is over mobile phone.  This is fostering a level of comfort with and demand for mobile-commerce solutions unlike any other country.  While the demand is great, India has a generation of small businesses and individual service providers being left behind because they lack the technical expertise and resources necessary to compete.  Through creating new opportunities for consumers mCommerce enterprises are disrupting traditional markets and enabling new livelihood opportunities for millions in India’s service sector.

In the first of two articles, we focus on how mCommerce is Transforming Business As Usual For India’s BoP, by exploring how India is uniquely positioned for transformational change.  This lays the foundation for the second article, which demonstrates mCommerce companies and business models Putting India’s Future in the Palm of Its Hand with mCommerce.

The Growth of mCommerce

Ecommerce in India is booming.  In 2014 startups like Flipkart, Myntra and Snapdeal have received hundreds of millions in funding and global retailers like Wal-Mart and Amazon have been jumping into the scene as well.  While eCommerce is on track to grow from $3.1 billion to $22 bn by 2020 and $75 bn by 2025 (China was 200 bn in 2013 for perspective), the continued penetration 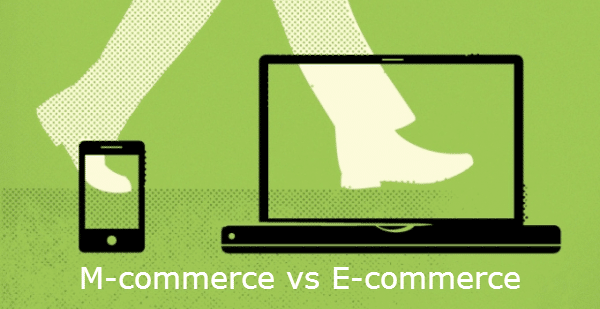 of mobile phones is leading the sector to transition from the question of ‘if’ to ‘when’ mobile traffic will surpass desktop traffic.  Evidence of this can be seen in India’s largest eCommerce marketplace Snapdeal, who now gets over half of its sales from mobile transactions, up from just 5% nearly a year ago.

Indians are young and Internet penetration is growing fast, especially in rural areas

In 2014 225M mobiles will be purchased in India, and many of these users will be accessing the Internet for the first time.  Today 42% of Indian homes have internet access in some form and there are 930M active mobile connections accounts utilized by 200M unique mobile users.  Last year two-thirds of users—or 130M— used their mobiles to access the Internet and 20M shopped online. 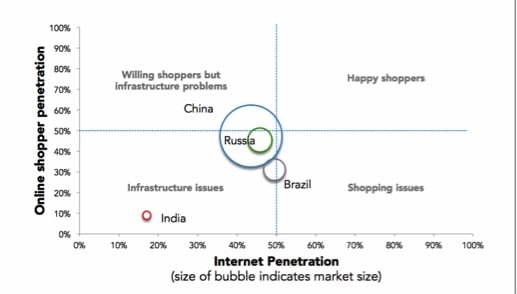 While these numbers seem impressive on the surface, this Accenture image shows that India’s internet penetration and online shopper market size are still very small in relation to their potential.  This is exciting because it shows the growth of mCommerce in India has just begun. According to estimates by Accenture in their 2014 deep-dive into India ecommerce, number of internet users and mobile shoppers are expected to double to 400M and 40M respectively by 2016 and over 90% of these users will be using their mobiles to access the web.

Due to the challenges associated with India’s infrastructure, and the increasing availability of affordable mobile devices, India’s fastest growing area of new internet users are coming out of rural areas or Tier 2 or 3 cities.  From October of 2013 to June 2014 for example, rural penetration is on track to grow by 7 million users from 25M to 32M. This is important because it means India’s new internet users are skipping hardline connections to access the internet in a ‘mobile-first’ capacity on their phones.  The mobile-first distinction is significant because the majority of mobile-first consumers utilize mobiles as either their primary or exclusive connection to the web. In 2013, 34% of Indians exclusively accessed the internet on their mobiles.

In addition to a growing population of mobile-first users, one other significant factor impacting mCommerce is age.  With two-thirds of India’s population sitting below the national average age of 26, purchasing products and services is becoming second nature for a significant portion of Indian consumers.  Thanks to their “carry it anywhere, everywhere” convenience and accessibility, mobile phones are passing laptops and PC’s to become the medium of choice for accessing the web. 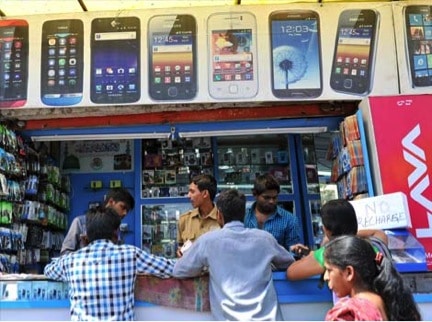 This is significant because India’s mCommerce user base is composed of a new and growing generation of users who are comfortable shopping and buying on their mobiles.

In this study of Indian consumer preferences 40% of smartphone owners had already purchased over a mobile device—double the global average of 19%.  In addition, half of the consumers preferred purchasing over a mobile optimized site while 38% preferred shopping on an app.  These usage and preference trends are significant; in retail for example, mobile users are more likely to be repeat customers and to place larger orders than their eCommerce desktop counterparts.

A new generation of users is starting to prefer mCommerce and they want more!

Indian consumers are not just comfortable with mCommerce as a medium for purchasing; they are starting to prefer it. This growth, coupled with changing global perspectives towards social media or even the sharing economy, is creating a consumer base ready for a new generation of mobile-based goods and services offerings unimaginable just 5 years. (for a great insight into next generation services, check out Trust in the Sharing Economy from Wired)

While the demand is large, consumers can’t find a match for their needs

Over 90% of India’s economy is informal and fragmented. Rather than being met by one large market of supply choices commensurate to India’s size, consumers are constrained to small local offline markets where choice and market competition are limited. Without a viable, centralized place to shop for and compare services, consumers are limited to word-of-mouth referrals and local reputations.  Once connected, they face inconsistent quality and a lack any way to provide feedback or seek retribution for poor services.  As a result, shopping for quality services is time-consuming and inefficient.

How independent service providers and small businesses are being left behind

India’s small informal markets are not only a problem for consumers – they also tie the hands of small businesses and individual service providers. As India’s tech-savvy consumers are becoming more complex and sophisticated, so are their standards. Unfortunately, small businesses don’t have the operational understanding, technical expertise and financial resources necessary to find and satisfy these customers. The challenge of finding enough customers leaves most small businesses struggling to make ends meet. As a result, they don’t have the time or energy to create differentiated products, let alone leverage the advantages of being small, flexible and nimble.  Lack of market access, coupled with the inability to differentiate, leaves small businesses trapped in non-competitive markets that support inefficient business models and inequitably distributed margins.

At the onset of this article, we set out to explore the “ideal conditions necessary for mCommerce to transform how an entire country does business” and that “these conditions now exist in India.”  While India has a young tech-savvy generation of mobile-first internet users who are comfortable with and increasingly prefer mCommerce, consumers are constrained to small local offline markets with limited competition and inconsistent quality.  At the same time, in the midst of a growing and increasingly complex economy, India’s service providers and small businesses are being left behind because they lack the market access, technical expertise and resources necessary to compete.  mCommerce is uniquely positioned to fill this gap between the demand of India’s next generation of consumers and the supply of small business.

For tangible examples and insight into how mCommerce enterprises are using mobile platforms to provide India’s BoP small businesses with the support and expertise necessary to leverage their unique attributes (size, flexibility, location) to create differentiated, high-quality services, be sure to check out the second article of this series mCommerce: Why India’s Future is in the Palm of Its Hand.

Next livelihoods article: mCommerce: Why India’s Future is in the Palm of Its Hand