Living at the Edge of Poverty (and the Ayeyarwady) 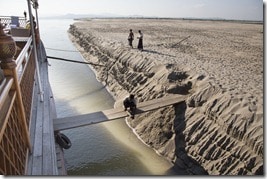 Along with seven others on a photographic trip through Myanmar, I recently received a first-hand lesson in “bottom of the economic pyramid” (or “BoP”) family finances and life. The experience was informative to my continued efforts in thinking through what is needed to improve the lives of those at the BoP, in Myanmar, India, and other countries with large populations living on the edge of poverty. My conclusion in this specific example: education or vocational training is the best answer. And that’s a generational fix, not likely to help the adults we met who have feeding-the-family responsibilities which would not enable them to pursue skills development. UPDATE: one of our interns just  forwarded me this depressing video about child labor and lack of education in Myanmar. 6 minutes of pain. No answers suggested. But worth watching to provide a little more context.

The Sand bar. At the northernmost point of our travels through Myanmar, we “docked” for the afternoon and night on a sandbar in the middle of the Ayeyarwady river, about 10km south of Bhamo. The Kachin State city of Bhamo (which has many spellings) is bustling with activity and dust, with the frenetic feel of a frontier town, not far from the border with China.

Seeing there was not much to do on the sand bar where we tied up, we quizzed our captain as to whether we could take the smaller boat into Bhamo for the afternoon. The short answer was no, we only had a permit to go there the next day, and that if we went anywhere other than around the sand bar (including even to neighboring villages or anywhere else nearby), the captain and tour company could lose their licenses. The government is quite strict about where foreigners can go in Kachin State due to unrest which has been noted in the global press recently. 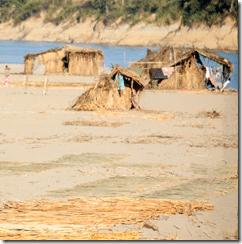 Three Shacks. Fifty meters up-river from us were three seasonal shacks, occupied by Burmese locals taking advantage of the free rent on the sand bar which will again be underneath the Ayeyarwady in a few months. Given that our neighbors appeared to be engaged in interesting work, we asked our guide Yan to join us and meet them to learn their story. 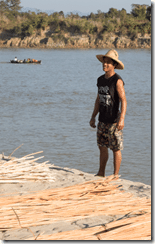 The first thing we asked about was the “unrest” in the area – fighting between Kachin rebels and Burmese forces. We learned they had heard gunfire throughout the previous night, but it was not nearby. We also heard that the mom’s ~20 year old son had recently been kidnapped by Kachin rebels who were concerned he was a Burmese spy. He had been in the foothills collecting the vines with which the family makes its winter living (seen in the photo to the right). Fortunately a Chinese woman known to the rebels convinced them that her son was doing only what he said, and the rebels let him go. After these introductory stories, we were feeling OK about hanging on the sand bar for the evening, away from any potential governmental or rebel action. 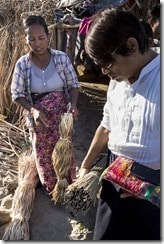 Business at the Edge. We then discussed their business. The mom was enthused that foreigners were interested to learn about what they family did, and she eagerly answered our questions through our guide/interpreter, Yan.

They extended family (mom + husband, 5 kids, two of which had wives and a young child) lived on the sand bar for about 3 months every winter. The men cut the vines from the foothills and brought them to the river. One of the teen boys has been in school but dropped out recently to come help the family collect and process more material. After the men delivered from the mountains, the three women soaked the vines in the river to make them supple enough for basket weaving. They also dried and cut other reeds, to be used for baskets and other work needing more structure.

At the end of the collecting, drying and cutting process, the entire extended family would be picked up by friends with a boat, load their belongings and cut / dried materials on the boats, and head a day or two down-river to sell the fruits of their labors. We were not able to learn what their other subsistence occupations were, but they were presumably not as good as the vine and reed work, as they were very enthused to be doing it! 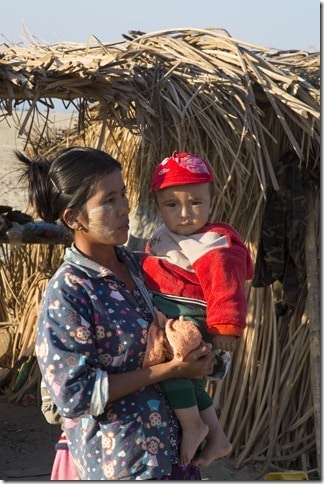 After learning the basics of their work, I asked about how much they were paid for the basket-making materials. The matriarch said they made at least $300, and potentially up to $500 total. I asked if this was per month, or for all three months. Yan confirmed it was for the season’s work, for the entre extended family of ~10 people. That comes out to around $3-5 / day to support the family. They are definitely living at the “base of economic pyramid.”

Optimism. As I often find when speaking to families living in what westerners would consider extreme poverty, I was taken by the optimism of this family. Later I quizzed Yan about this. I asked “Are they happy?” To which is answered unequivocally “yes.” We discussed that they did indeed have dreams of a better life that they saw others leading in the passing boats or in the local cities. But Yan was clear — and it also came through in the demeanor and engagements we saw they had with the boat crew – that they accept what they have and are happy to be making things incrementally better for their kids. On that note, I did spot a solar panel on top of one of the huts. We learned they had purchased that and a VCD player with some of last season’s earnings as a way to make life on the sand bar less boring for the kids.

Possible Interventions. There are hundreds of thousands of organizations working world-wide to improve the lot of those at the BoP. (India alone has 3 million NGOs!) As we chatted with this family, I was thinking about what some of the new breed of for-profit organizations I know of in India could do for people in similar positions.

The most important intervention is education. Burmese education spending and commensurate outcomes are not good, as you can see here. If BoP Startups like Hippocampus Learning Centers were to offer low-cost (< $5 / month) early learning programs in rural areas in Myanmar like they do in India, children like the one pictured above would have a better chance.

Another option is adult vocational training. We recently met with an entrepreneur who claims that he can train an uneducated cow-herder with sufficient skills to work in a BPO facility in less than a year. We’re looking forward to seeing this company’s methodology and evaluating national and international scalability.

And a third option is in creating rural livelihood-enhancing opportunities for such families. This could be in the form of microcredit loans to purchase animals or other assets that would improve their earning potential, or in helping them add more value to their basket products and sell resulting crafts via one of the many organizations building such models in developing economies.

The family living at the edge of the Ayeyarwady was optimistic, and I am also.