The glory days of popular cab-aggregators Uber and Ola seem to be fading fast. Both the companies which once lured drivers, making them take hefty bank loans for purchasing brand-new cars, are now facing severe backlash with ongoing strikes and protests across major cities (Delhi, Bangalore and Chennai). As per Economic Times, “32% of fleet operators’ demand for new cars came from apps like Uber and Ola.” Over the last year, though the ridership has unarguably grown, the generous financial incentives have nearly stopped. After all, how long can investors underwrite cheques and companies absorb losses? The result? Looming debts, lower wages and longer working hours in chaotic, polluted cities – all of which are adversely impacting drivers’ financial, physical and mental state of being.

Keeping the current chaos aside, even though Uber and Ola managed to become household names, surprisingly they haven’t been able to curb Indians’ desire to own a car. Today, our country has over 25 million private cars; a number that’s growing by 7.5% per year and expected to double by 2023. The rationale as Swiss Investment Bank UBS’ research points is that the cost of availing services from cab-aggregators is similar to owning a car. The report says, “For India, given the extremely low penetration of cars and their strong association with social status, we believe the risk of a negative impact on car ownership is low. Our analysis shows that RoD (ride-on-demand) cost is similar to that of a self-owned car and slightly over half that of a chauffeur-driven car.” With rising disposable incomes, a chauffeur-driven car is increasingly becoming a new normal. 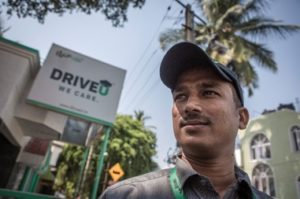 In Bengaluru alone, there are over 15 lakh private cars and at least 30 per cent owners are seeking reliable drivers. With accelerating urban population, expected to increase to 637 million by 2025, further worsening infrastructure capabilities (current average car speed is ~9km/hr), driver service for personal vehicles will soon become a non-negotiable. This is a large, unaddressed market – one which hasn’t caught the fancy of many entrepreneurs, but one. Bengaluru-based DriveU is India’s first and fastest growing on-demand service for personal vehicles, well on its way to prove the need for such a service, despite Uber and Ola’s thriving existence.

Prefer your personal vehicle? DriveU will drive you, everywhere!

Founded in July 2015, DriveU provides background-verified, trained and uniformed professional drivers via the DriveU app (available on Android and iOS) and at the website, at a nominal cost of INR 89/hr (~USD $1.33) for intracity trips and INR 1199/24 hrs (~USD $18) for outstation trips, catering varying needs from daily commute to work to weekend getaways; all on-demand, in less than 30 minutes. It’s mandatory for DriveU’s drivers to have a minimum of one year experience before they sign up on the platform and the company conducts a driving test and professional and personal background verification. All drivers have access to health insurance and their earnings are paid weekly. For customers, apart from availing on-demand driver service, other advantages include no surge pricing, and ease of payment (cash/mobile wallet/DriveU wallet/PayUBiz – which allows access to most banks). DriveU is currently servicing across 6 cities – Bengaluru, Chennai, Mumbai, Delhi NCR, Pune and Hyderabad.

According to Rahm Shastry, Co-Founder of DriveU,

“Investors would often question as to why would drivers embrace our model, when there are unicorn cab-aggregators rolling out high incentives? But, an often-overlooked aspect is that there are countless drivers who can’t afford a down payment to buy a car. Our bet was on that segment.” He further says, “In our case, drivers are driving others’ cars – they aren’t burdened by EMIs, insurance and diesel costs. A full time driver earns between INR 25,000 and INR 35,00. Whatever amount they make, they keep. In a good business model, one which benefits both the company and its employees, it’s not what you made, it’s what you keep that matters.”

Since founding, DriveU has completed more than 135,000 trips, with over 75 per cent of trips demanded by repeat customers. The drivers’ average monthly income is ~INR 25,000 (~USD $373) with few managing to make in excess of INR 40,000 (~USD $597). As a private driver they typically earned ~INR 15,000. Clearly, DriveU is making a significant impact on a driver’s livelihood. More importantly, a full-time DriveU driver works around 8 to 12 hours in a day to earn this income, unlike their brethrens in the industry who typically is forced to clock in excess of 15 hours a day to simply keep up with their financial obligations and earn a decent income.

Mohammed, a Bengaluru-based driver had worked with multiple local cab aggregators which would deduct as much as 40 per cent of the earnings and have no fixed working hours leading to erratic income. Things changed when he joined DriveU. He says,

“At DriveU, the first few duties are assigned the previous night and the subsequent ones take less than half hour once the previous ride is over. We have uniforms, are well-trained and have a manual that helps us understand how to deal with customers in different situations. Further, unlike other cab aggregators, there is no surge pricing; DriveU has flat rates which ensure high customer-satisfaction and retention.”

With flexible working hours and a high tech-enabled platform, Mohammed’s monthly income has regularised, with him earning nearly Rs 25,000 (~USD $373) every month.

Another driver, Gregory Rosario, a 50-year-old man with decades of experience in publishing and book trade until he lost the business to new media, chanced upon DriveU in the newspaper and decided to join. He says,

“DriveU with its deep technology, value and professionalism for both drivers and customers, instils a sense of pride in me. On an average, it’s not difficult to take home approximately Rs 1,000 (~USD $15) per day.”

By providing predictable, background verified, high-quality driver service with a transparent pricing mechanism, DriveU has been growing at a steady 20 per cent month-on-month, is planning to expand services to 10 cities by end of the year.