In the midst of economic transformation, how will India absorb a growing workforce on track to number 1 billion by 2030 while in the midst of economic transformation?  With the Indian government a few years into the ambitious goal of training and skilling 500M by 2022, or 50M a year, it is important to understand the unorganized nature of India’s economy and the urban exodus from agriculture in order to identify which growth sectors will have both the skill requirements and capacity necessary to meaningfully absorb and enable India’s huge influx of new labor.

Today 93% of India’s jobs are informal while 84% of the workforce finds employment in the unorganized sector.  The Informal Sector is comprised business activities not formally regulated by the government.  These producers of goods and services “generally have small economies of scale, seldom use technology and have a virtual absence of well-maintained accounts.”  The Unorganized Sector consists of all enterprises “engaged in manufacturing or services which are unincorporated, owned by individuals or households, operated on a proprietary or partnership basis and with less than ten total workers.” 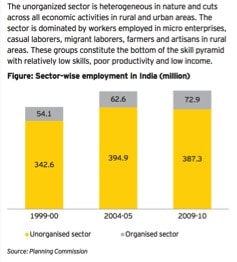 These distinctions are significant because the lives of those employed in these sectors are characterized by limited access to benefits and support services (less than a quarter have access) while living day-to-day and pay-check-to-paycheck.

In the midst of the push to skill 500M Indians and the expected need for an additional 35 crore (347M jobs) by 2022, only 7 crore (70M) of the jobs are expected to be organized sector positions while the share of informal employment is expected to increase from 93% to 95%.  With these changes en route, it’s important to understand how this will look within India’s main fields of employment.

Fifty years ago Agriculture accounted for half of India’s GDP and more than three-fourths of its employment.  Today, it only accounts for 13.7% of GDP but employs 51% of Indian’s unorganized workers compared to the manufacturing and service employing 20% and 29% respectively. 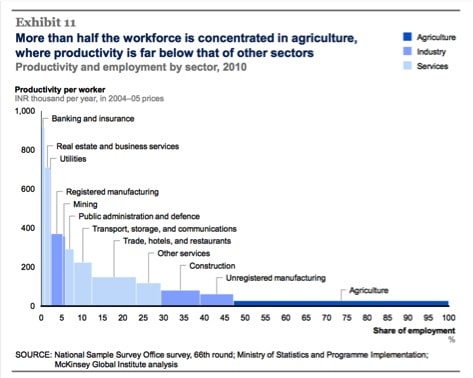 India’s transition from an agri-centric economy has accelerated in recent years, forcing hundreds of millions of rural inhabitants into challenging situations and left to choose between two ugly realities: i) Remain, surviving through low-return and subsistence farming, and/or, struggling to find non-farm related opportunities due to limited market access or marketable skills, or ii) Depart, leaving as part of the 100M plus urban migration to urban centers where the lack of marketable skills and inability to connect to gainful employment leads many to be exploited.  Against this backdrop, along with the challenges associated with an unorganized and informal economy, we transition the focus to the job creation.

Where are the jobs in the midst of the transition to a modern market economy?

As India transitions to a modern market economy, there are a few sectors and job hotspots which have the greatest potential to meaningfully absorb and gainfully employ India’s current and upcoming generations.  While there are a number of macro level overviews regarding the space, the image below is part of the Forbes article India 2022: High on Skills but Low on Jobs? which gives a simple and helpful high-level overview into 10 significant growth industries—such as retail, auto, construction and IT— that are expected to require 245 million by 2022. 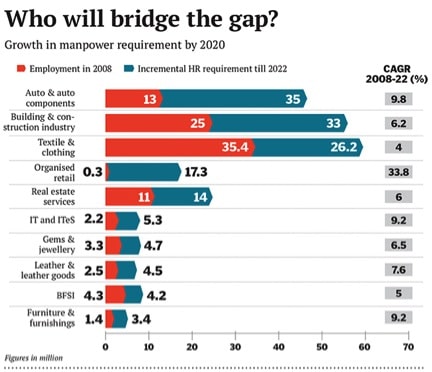 India’s Information Technology Enabled Service (ITeS), Business Process Outsourcing (BPO) and Banking Financial Services and Insurance (BFSI) sectors need 20 million skilled employees by 2022.  The ITeS and BPO sectors in particular account for 8% of India’s GDP, 25% of exports, the direct and indirect employment of 12M and they are expected to hire nearly a million new recruits per year in the coming years.  In the next article, learn more about how companies are working to improve the livelihoods of India’s BoP populations through market-linked training and placement (Edubridge) and via areas such as impact sourcing (iMerit), inclusive training (Youth 4 Jobs) & employment (Vindhya’s) to equip rural youth, women and PwD.

India’s Manufacturing sector is aiming create 100 million skilled jobs while increasing their impact on GDP from 15%-25% during the next decade, which is particularly significant because this sector represents one of the better cross-over opportunities for those exiting agriculture.  In the next article, learn more about i) the sectors massive growth potential, ii) the manufacturing sector’s unique opportunity to emulate the path utilized by the ITeS/BPO sectors and iii) to learn more about the cutting edge skills development underway in the space such as remote training (Velu Welder) and e-Learning over mobile devices (Tata Autocomp e-Learning).

India’s Textile and Handicraft sector provides livelihoods to 10 crore (105M) Indians according to the 12th 5 Year Plan, making it the countries 2nd largest employer after Agriculture.  Often among the poorest of the poor, artisans working in cottage based labor-intensive trades such as  handicrafts, textiles and jewelry are being left behind  due to the increasing popularity of mass produced goods and because they are often trapped in inefficient markets and exploitive supply chains without the capital, linkages or market access necessary to succeed. In the next article, learn more about how about how companies are disrupting these cycles by connecting artisans directly to Customers (Crafts Villa), Businesses (GoCoop) and Inclusive Supply Chains (Mela Artisans).  (Check out the 8th Livelihood article Disrupting Exploitive Supply Chains: Comparing Two Approaches Enabling India’s Artisans for a deep dive into the unit economics of the supply chains and the disruptive business practices and technologies being deployed to empower artisans)

In addition to exploring these three areas, we’ll also introduce the fourth area of entrepreneurship, where forecasts show their is market potential to create 2,500 scalable businesses which could generate revenues of Rs 10 lakh crore ($200 billion) and employment comparable to the IT/ITeS/BPO sector.

Even though India has the potential to enjoy a massive demographic dividend, it is definitely not a given.  For India to achieve its goals, it needs to train a minimum of 50M a year, while creating a minimum of 35M new jobs a year till 2022.  For this to occur at scale numerous innovative, disruptive and scalable solutions must be discovered and implemented by businesses during the next decade.  While the government and big businesses have a part to play, the individuals, small businesses, entrepreneurs who make up a majority of India’s 93% unorganized economy must ultimately become the heroes for India to succeed.

With this in mind, the next article of the series Four Areas Transforming Livelihoods In India dives into the four sectors briefly explored in this article.  After diving into the unique ways each area is suited to significantly impact the livelihoods of millions, we jump in with examples of how enterprises are enabling and equipping the little guys to compete, be it via training and connections, or, new marketplaces and platforms.