India: The meteoric rise of smartphones

Due to smartphone affordability and mass adoption, internet and mobile services have reached the masses in India, leading to new business opportunities.

Both the mobile phone industry and the PC industry have witnessed two major evolutions: the first of breakthrough technological advances and the second, of affordability and accessibility. Both disruptions have created room for new business models to push industry boundaries and shake up market dynamics. While the PC has sold a few hundred million units a year at its height, the mobile phone has already crossed a billion in yearly sales. And this figure is constantly growing m m aking the smartphone revolution the most important technological trend of the decade.

India’s Mobile Industry – Much more than meets the eye

A recent report from We-are-Social [Jan 2014] puts India’s mobile penetration at 73% (up from ~30% in 2009), fast catching up to the global average of 93%. Still, mobile-Internet penetration remains low at 11%, because of the relatively high cost of smartphones compared to basic feature phones. While a few feature phones do have internet capability, it is usually limited with little 3rd party application support. Deeper penetration into low-income sections, which form over 70% of the population, has been difficult. In comparison, however, the absolute number of people in India using mobile Internet nearly equals half the population of the USA. And the good news is that this number is growing soaring. India is the fastest growing country for mobile Internet users with the latest predictions at 20% growth every quarter. This growth is mainly driven by low-cost smartphones, which are particularly interesting due to their enhanced capabilities and potential to enable services for the masses.

With the advent of affordable smartphones (₹3,000–₹10,000/US$50–US$165) designed for the Indian user from indigenous manufacturers such as Micromax, Karbonn, etc., as well as increasingly low-cost data connectivity options, more people are shifting to smartphones and mobile Internet. Other factors heavily contribute to this shift, including the fact that 98.9% of India currently has no access to fixed-line broadband connectivity options and industries like banking, retail, entertainment, health and education have begun to introduce compelling mobile services. Predictably, the contribution of smartphone users to Internet traffic has long overtaken that of PC users and the gap continues to widen. Due to these factors, smartphone sales have begun to cannibalize the traditional feature phone market – while the overall market grew by 12% last year, the smartphone market grew by a whopping 229%. What’s more, industry insiders say that we are more or less at the tipping point for the smartphone market and this trend is expected to sustain in the coming quarters. At this rate, the smartphone market will overtake feature phones in terms of number of units sold, by 2017. 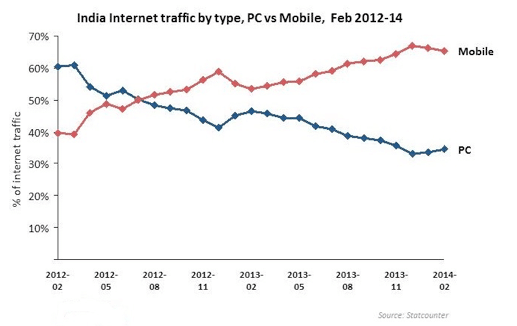 In fact, in India more than 50% of users access the Internet only via their smartphones, most of these from tier 2 and tier 3 cities. After their first brush with email, social media, web-search services, and the like, people are finding innovative ways to improve their lives.  IAMAI reports that while rural areas have a much smaller contribution to mobile Internet activity (2.5 crore or 25M users) compared to urban (8.5 crore or 85M users), this statistic will soon change as growth of smartphone users in rural India, at 50% per year is more than double the growth in urban India.

What the future holds in store 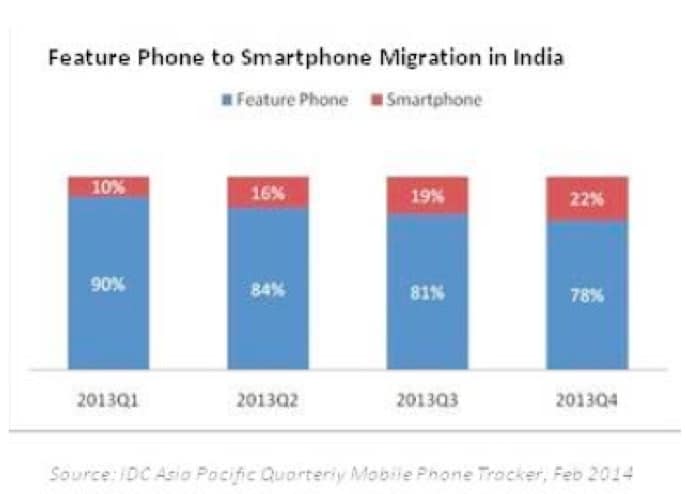 How will this unprecedented adoption of smartphones and mobile Internet usage create opportunities to impact the lives of the BoP? Smartphones are poised to bridge the digital divide in a big way, and open up hitherto inaccessible markets for a number of services such as banking and education. As prices plummet, affordable phones will eventually become much faster and easier to use (language customization, more battery life, etc.), while high-end phones graduate into wearable and voice-activated technology. In the coming articles, we drill down further into the various kinds of smartphones available in the Indian market and discuss how companies are leveraging this explosive growth in innovative and interesting ways.

We are enthusiastic about the scale and potential of opportunities presented by the proliferation of low-cost smartphones to create new disruptive business models reaching the masses in India. We’re actively seeking great entrepreneurs who are building startups around this new and upcoming space. Reach out to us if you are an entrepreneur or know one working in this area.

Getting Funded >
More in Tech for Development >