Competition is decreasing costs while increasing quality in the smartphone market, leading to a win-win for impact enterprises and the BoP population.

An earlier update (India: The meteoric rise of smartphones) discusses the favorable situation prevailing in the Indian mobile phone industry in terms of the explosive growth of smartphones. This article is an attempt to dive deeper with regard to the various types of phones available, their respective offerings and how this will change in the near term.

Today, the affordable and ultra-affordable segments (see figure below) are primarily driving growth in the mobile industry and they are uniquely positioned to disrupt this a well as related markets.

As far as features go, the gap between these and the high end/mid-tier phones is quite small as a result of differing brand equities and quality of products. However, although these devices are flawless on paper, the performance of cheaper phones leaves a lot to be desired. Common complaints include slow operation, malfunctioning cheap hardware and increasingly short battery life. However, due to fierce competition, this breach is expected to gradually vanish in the short term, while the gaps in features also shrink (until new groundbreaking technologies emerge).

The average Indian consumer is spoilt for choice! 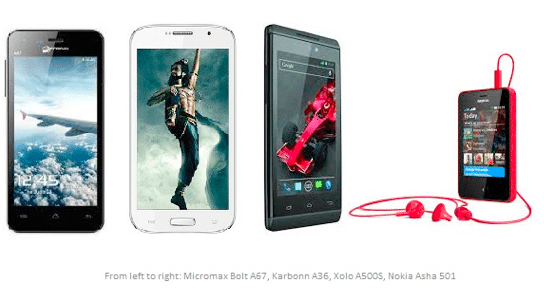 There are over 60 phone manufacturers and 18 telecom providers in India, each vying for a share of the cheap smartphone pie. Seeing the raging success of the affordable segment and the huge untapped potential, many new manufacturers (both international and home grown) are jumping on the bandwagon to offer smartphones with a wide array of features and at a range of prices. In an attempt to differentiate, companies are addressing issues particular to the Indian market like the current lack of language, build and feature customization. For instance, in an attempt to woo back Indian consumers, Nokia has finally entered the Android ecosystem with the unveiling of its new dual-sim Nokia X model. Other players are experimenting with regional language support, AAA battery powered mobiles, Solar charging panels and so on.

This trend isn’t only limited to big players like Micromax, Karbonn and Samsung. After the recent success of the Aakash tablet, the Indian Government is discussing the development of a new low-cost smartphone priced under ₹ 6000 (US$ 100). Another new entrant to the fray is Mozilla, an open source non-profit company – Mozilla is trying to create a niche in the low-cost segment with the custom designed Firefox OS based on their successful browser of the same name. The company has big plans for India and plans to introduce a ₹ 1500 (US$ 25) smartphone in the near future.

It is no surprise then, that the growing market share of smartphones is already competitive to that of feature phones across the lower and higher price brands. 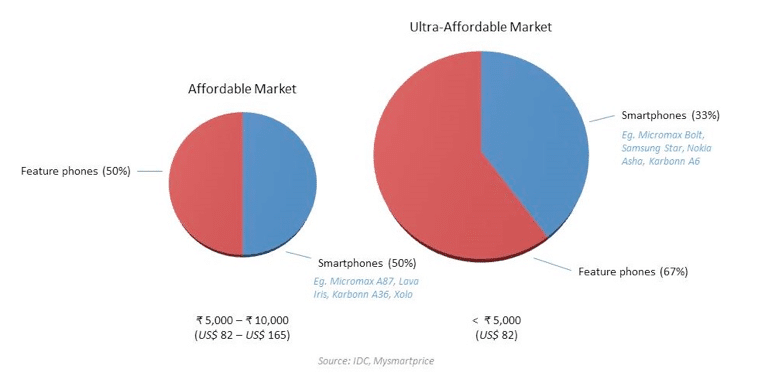 Where is the impact?

It is a happy story that smartphones are getting cheaper and better. However, in order to understand how the BoP is exceedingly advantaged by this, it becomes necessary to grasp the broad spectrum of uses that these smartphones enable beyond email, social media and web-search. To gather the resulting potential for improved service delivery and how this growth will manifest itself into disruptions in various areas such as banking, education, healthcare – the sector that begs looking into is the mobile value-added-services (mVAS) industry. Please see subsequent updates for a deeper analysis of this sector and how some entrepreneurs have already leveraged smartphones in their business to solve tough problems creatively.

We are enthusiastic about the scale and potential of opportunities presented by the proliferation of low-cost smartphones to create new disruptive business models reaching the masses in India. We’re actively seeking great entrepreneurs who are building startups around this new and upcoming space. Reach out to us if you are an entrepreneur or know one working in this area.

India: The meteoric Rise of Smartphones >
mVAS – The Brave, New World of Opportunity >
Getting Funded >
More in Tech for Development >