The Timing Is Right for India

In everything from geopolitics to rocket launches to starting companies, timing matters more than many might think. I wanted to share a few thoughts from a Western perspective on the time being right for India in the context of the December 31st 2022 New York Times article “Russia’s War Could Make It India’s World”. But before going into the geopolitical discussion, let’s take a look at the effect of timing on startups.

Timing Matters for Startups in USA

As anyone who has started something new in a startup or corporate environment knows all too well, timing matters a lot in the world of innovation. In Bill Gross’s famous 2015 Ted Talk, he concludes 2 minutes 30 seconds into the talk that of the five biggest factors that contribute to startup success (including the idea, team, execution, funding, and timing), the last factor –timing– mattered the most, accounting to 42% of the difference between success and failure. That’s counterintuitive, but it aligns with my and my partners’ experience of founding startups, leading big company innovation, and making venture capital investments over many decades. Bill Gross’ best example is AirBNB which was passed over by countless top investors, but ultimately landed enough cash to launch and found itself in absolutely the right place at the right time as the 2008 recession hit. The recession caused a rapid and unexpected behavioral change as people were looking to find ways to augment their income, making them willing to rent rooms in their house to strangers that they never would have considered before. Timing matters.

Timing Matters for Startups in India

We thankfully were not investors in India’s first e-commerce boom that started around 2010. Two examples – Snapdeal and Shopclues – were both massively well-funded start-ups that raised capital from investors with high hopes that India would be following the accelerating e-commerce trends of the west. According to public reports, Snapdeal raised over $1.6 billion in funding from investors such as SoftBank, Alibaba, and eBay. Shopclues also raised a significant amount of capital, rising to early unicorn status in 2015. However, despite this funding, both companies struggled to compete in the highly competitive e-commerce market in India and eventually had to drastically scale back their operations. While there were many well-reported execution challenges with both companies, I believe it’s fair to say that they and others in that timeframe suffered from being early — they were spending money and growing recklessly with an assumption that demand would expand exponentially, which it just didn’t at that time, for many reasons, leading to cut-throat competition and profits that could never be realized. I saw this personally in the formative years of Silicon Valley, having co-founded the multimedia e-commerce startup eShop in 1991 which was well ahead of its time. Timing matters.

On a more positive note, one of Unitus’ earliest portfolio companies, Cuemath, was very much in the right place at the right time (along with many other edtech companies) as the pandemic lockdowns started in April 2020. Prior to then, their teachers delivered 90%+ of their after-school math classes from their homes to kids living nearby. Thanks to quick execution and frankly no other option to survive, the company pivoted to 100% online within 6 weeks after the first lockdown, and within 2 years after that, they not only grew dramatically in online tuitions in India but also built a much more lucrative revenue stream delivering the same overseas, accounting for the majority of their revenues and profits as of 2023. And unlike other edtech companies that have struggled with deflating demand and increasing customer acquisition costs as kids started back to in-person classes, Cuemath has thrived, building a healthy online-dominant business that was fueled by the pandemic but kept running at full speed as the pandemic subsided. Timing matters.

Many of today’s startups could not have even been imagined in India 5 years ago, as they depend on India Stack, which is a boon to nearly every startup and is continuing to deliver more value in more areas. ONDC – Open Network for Digital Commerce – is poised to be a game changer similar to what UPI/Aadhaar did over the last decade. The relentless march of governmental tech services combined with continued mobile penetration and virtually free data are huge enablers of growth unlike what’s seen anywhere else in the world. Add rational policy improvements in logistics and infrastructure and it gets even better. Timing matters.

Timing Matters for Investing in India

India is in, as always, a complicated state of being, but it’s also in the right place at the right time based on current geopolitics and the realignment of the formerly-global “flat world” economy. Anyone who knows (or knew) anyone living in China has heard the stories about the unprecedented exodus of wealthy well-educated families. Every business that formerly depended on Chinese manufacturing, from Apple down to startups, is planning for secondary sourcing and/or for their entire relocation out of China.

What countries benefit the most from the decreasing trust of and increasing isolation of China? In real estate, it’s USA, Canada and Europe. In manufacturing and investing, it will be India. There is nowhere else with the population, cost structure, and [relative] political and regulatory stability to match India as a replacement for the capital and business opportunity exiting China. India’s alignment with Russia, while distasteful (at best) to the West, is enabling it to maintain affordable access to energy, while Europe and the US have substantial inflationary pressures due to the loss of access to “the world’s gas station”.

Serving India’s huge domestic market isolates many huge businesses from the ups and downs of the West. This will be ever more apparent as the 2023 recession takes hold of Europe and USA and likely has a limited impact on India. These and other factors have contributed to buoyant projections that now number 5, India will be the world’s third-largest economy by 2030, behind only the United States and China. The New York Time article linked above notes “…India wants to be a bridge power in the [new] world birthed by the pandemic and by the war in Ukraine. It believes that the interconnectedness of today’s world outweighs the pull of fragmentation and makes a nonsense of talk of a renewed Cold War. If a period of disorder seems inevitable as Western power declines, it will most likely be tempered by economic interdependence, the Indian argument goes.”

In considering investing in India from 2023 – 2028, one might start with the optimistic macro opportunities of the aforementioned geopolitical realignment vs. China. This will provide tailwinds for many startups. And the VC pullback of 2022 has led to “Survival of the Fittest”. Capital efficiency and clear path to profitability will lead to some phenomenal startups with outstanding exits.

When looking into the future, it’s always helpful to look at history. One could learn from the relative GDP growth rates after the 2008 crisis, where it’s clear that the recession that hammered the USA and Europe had virtually no impact on India, due in large part to its vibrant and growing middle-income consumption economy. 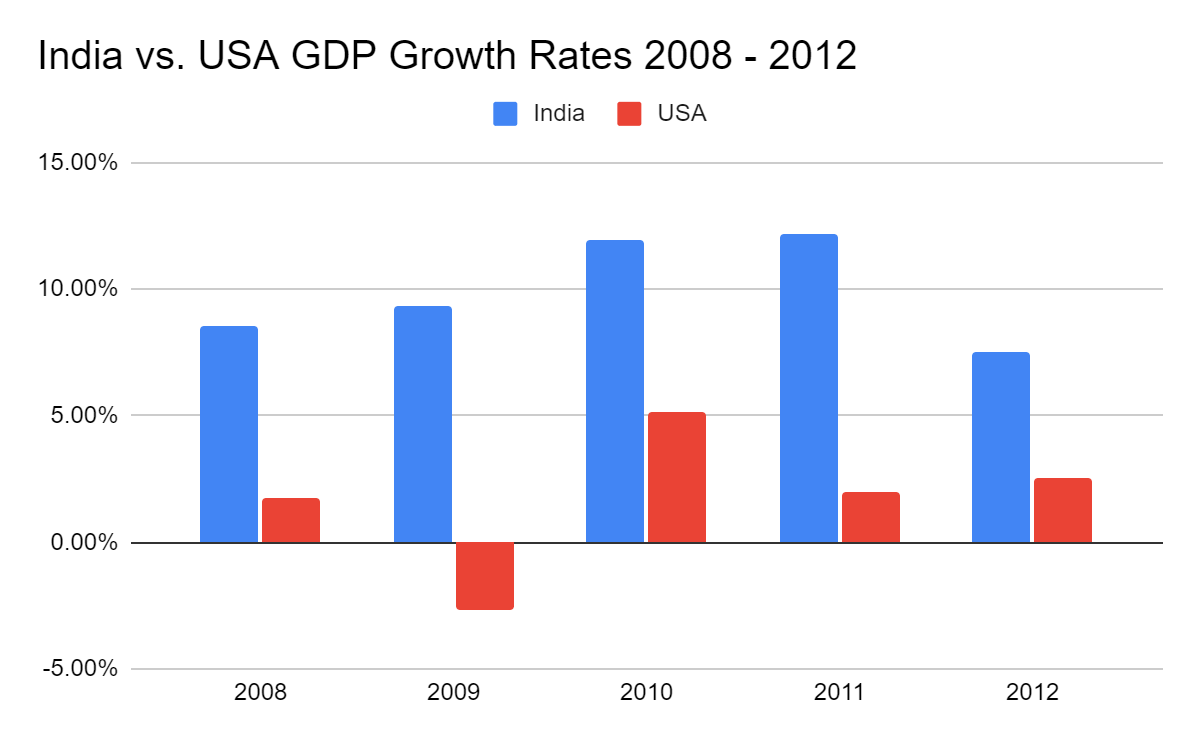 In December 2022, the World Economic Forum noted that “India is expected to be the world’s fastest-growing economy in 2023”.  India’s new mega-industrialist Gautam Adani is even more bullish, forecasting the 3.5 trillion economy to increase by another trillion every 12-18 months, leading to India becoming the world’s second largest economy by 2050.  Apply grains of salt as needed…

Looking beyond 2023, our crystal ball is a bit more conservative than Adani but no better than any other. In summary, I think it’s fair to say that the prospects for India over the next 5+ years are excellent, maybe the best they’ve ever been on a relative basis. Making it an excellent time to be investing more in India. Timing matters.

Posted by Will Poole, co-founder and managing partner, investor in India since 2003