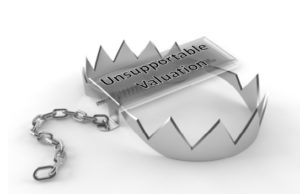 As a startup entrepreneur seeking funding for his/her company, there are few things more sought after than a “great valuation” from an investor. Unfortunately this is most often the WRONG point to focus on, and can do more harm than good. We can say this from experience of having been entrepreneurs seeking (and getting) early stage investments, and now being a VC dealing with entrepreneurs in whom we see similarities to younger versions of ourselves.

The fundamental problem is this: a narrow focus on a high valuation distracts from other equally if not more important considerations which include, in no particular order:

Many have written about the issues above at length. I encourage first-time entrepreneurs to get deeply educated on the “non-valuation” issues that come into any financing.  For this post, I will focus on only one topic — understanding early-stage company valuation from the perspective of a VC, and putting it in perspective of a multi-round series of venture financings’ that would typically span some 5-8 years.

The context of this post is centered on impact businesses in India which are characterized in general with the following attributes:

These final three points (operations, IP and gross margins) are vital for entrepreneurs to internalize. Many compare their impact business – and expected valuations – with high-flying web service businesses that have 60-90% gross margins, no distributed operations, and serious IP that sustainably differentiates them from competitors. The fact is that an impact business and a web service business could not be more different. Web service businesses are relatively inexpensive and quick to develop, they throw off enough cash to become self-financing at a relatively young age, and they typically have some fundamental IP value that’s hard to copy.

On the on the other hand, impact businesses take longer to grow, require substantially more cash to forward-invest and support the growth, are operationally more complicated, face significant competition over time, and ultimately must get to a very large scale to have the opportunity for a good exit.

It’s these realities of an impact business that drive many fundamental aspects of the financials and the ultimate valuation.

At the simplest level, an early stage VC like us needs to see an opportunity for a 10x cash-on-cash return in any investment we make. Simply put, that means for every $100k we put at risk at an early stage, we need to see a path to receiving $1M in 5-7 years, after the company has had multiple rounds of investment which dilute our as well as founder holdings. We clearly don’t expect all of our companies to get there; in fact the majority will not come close. But if we don’t make this a condition of selection (and of initial valuation), we will never achieve a high enough average return to meet the financial objectives of the fund.

A Model Series of Investments

The following chart shows a canonical model of venture investments made for a high-growth impact business, with each investment series completed 12-24 months after the previous round. Note that the pre-money valuation step-ups for each round are the minimum that a venture investor would seek to realize. Also note that these valuations have to be backed by a believable plan of correspondingly-strong fundamentals of the company, with the valuation multiples being supported by the revenue, margin, and growth rates. 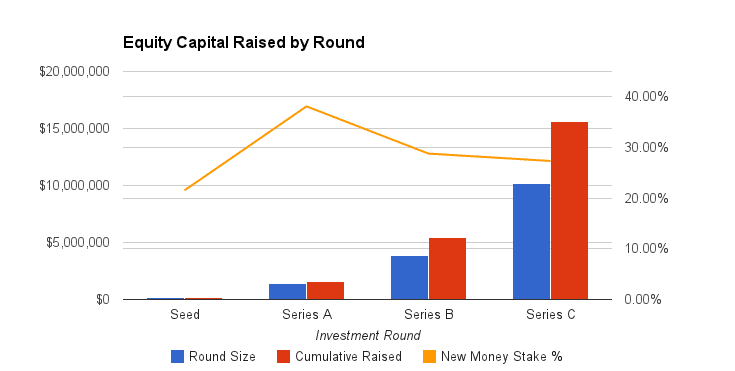 You might look at these numbers and think “I don’t need to raise this much capital for my business” or “I will be able to raise non-dilutive debt capital to reduce the amount of equity I have to raise”. You may be right, but history and the statistics are against you. Can you name a company with a similar business structure to yours which has exited at $50M+ (see below) without raising $15M+ in venture capital? From our experience, entrepreneurs almost always underestimate the capital amounts they require. And while investors will be highly motivated along with entrepreneurs to raise non-dilutive debt (on reasonable terms), in reality there are very few lenders in India who will take exposure to high-growth venture-backed operating businesses (vs. financial intermediaries).

What Each Group Owns after Series C

Investors look for founders and employees to have and maintain a significant stake in the company as it grows. In this scenario, founder plus employees own about 25% of the company after series C, which will provide for a very lucrative return as you’ll see in the following analysis. Founders may at first say “what, only 25%, that’s not enough!”. But read on founders, as a smaller stake in a big growing company is way better than a bigger stake in a small company. 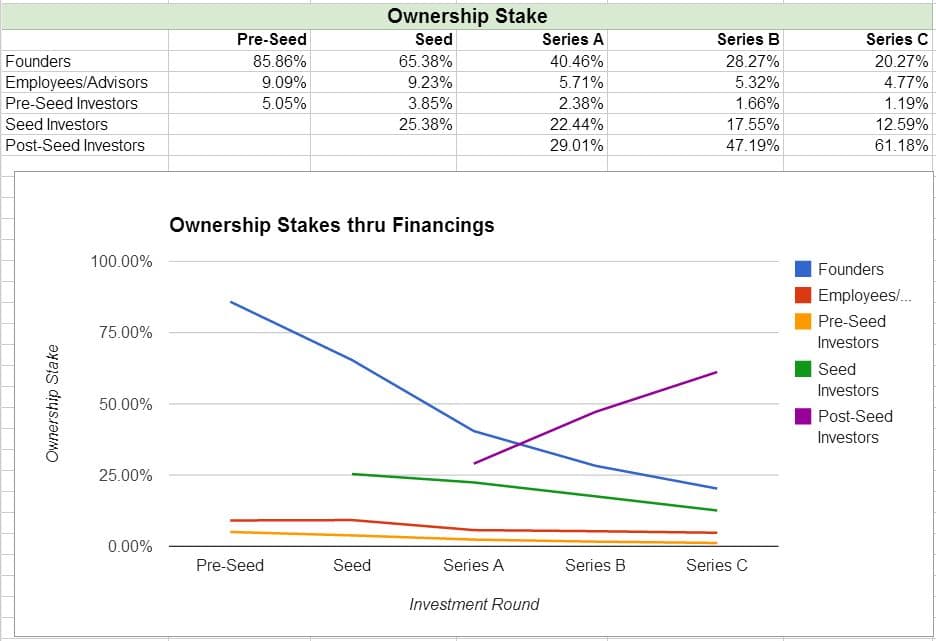 What Each Group Gets in Post-Series-C Exit Scenarios

While founders and employees and investors all have their own motivations for participating in building an impact business, they all ultimately have one thing in common: they want to be confident that the business can grow organically over time and ultimately achieve both impact goals and financial return goals of all parties. As I stated at the beginning, early stage investors need to have a believable path to a 10x cash on cash return. As investors come in later when risks are lower, their return multiples are naturally lower. The following chart shows total return by each class of shareholder in the same scenario we’ve been discussing above: 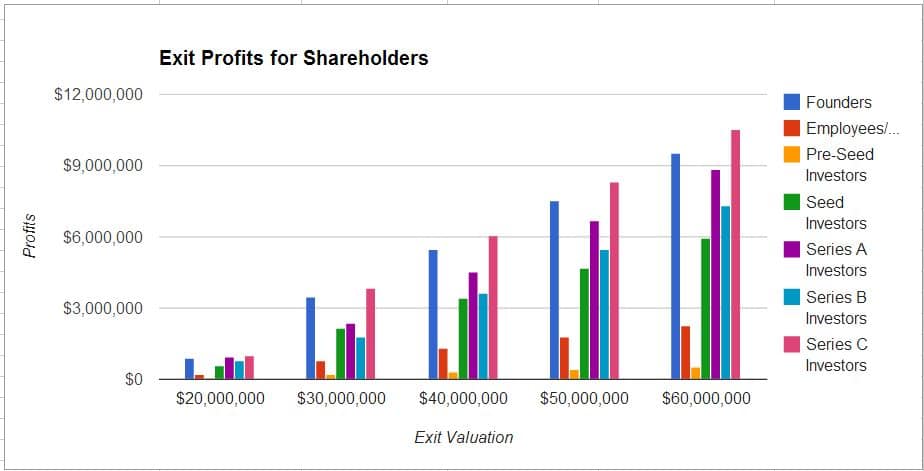 The modeled total returns in the scenario above result in cash-on-cash multiples for the investors as follows: 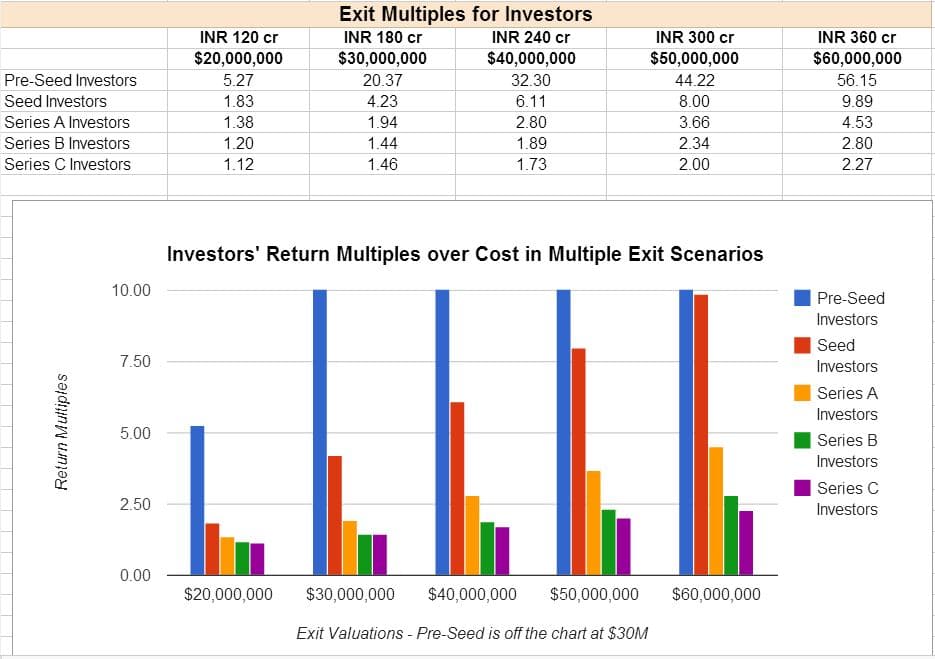 As you can see above, life is pretty good for pre-seed investors in any exit on this chart, and they make 19-52x return between $30M and $60M. Seed investors, on whom we naturally focus on the most, don’t make a ~10x return in this model until a $60M exit is achieved.  Series A investors who have a similar risk profile and return potential only see a 5x return at $60M exit. So why would a Seed or Series A investor invest at the valuations in this model? Many of them would not; some would only do it if they felt the company had the ability to grow organically after series B, or to out-perform the model’s expectations in Series B and C rounds.

There have been very few examples of venture-funded businesses achieving over $50M exit valuations in India. The only “impact business” exit over $50m has been the SKS Microfinance which did an IPO in 2010.

What this means for entrepreneurs is that if you want to take on venture capital, you need to be realistic about how your early-stage investors will value your business. Avoid the unrealistic valuation trap. VCs need to make money for their investors too, with returns corresponding to the risk they are taking.

The final important consideration for entrepreneurs is that taking money from a less-sophisticated investor at a higher valuation will NOT help you succeed. Doing so will all too often lead to a painful reality-based reset and “down round” which can demoralize and potentially kill your company.

The way to improve return outcomes for both entrepreneurs and investors is to take no more money than you need to grow the business at a healthy clip, and to find non-dilutive financing anywhere you can (affordable debt, etc.)